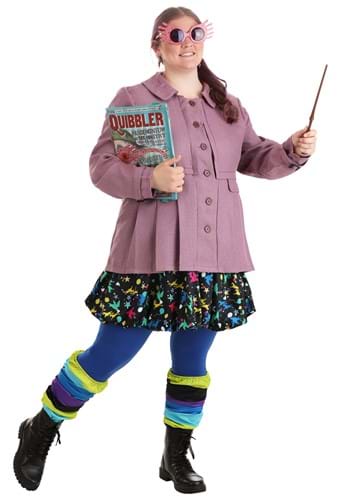 Many characters in the Harry Potter series aren’t exactly what they first seem to be. When we met Luna Lovegood at the beginning of Harry Potter and the Order of the Phoenix, we weren’t quite sure what to think of her. She has several strange ideas about magical creatures and has even earned the nickname “Loony” from some of her classmates. However, despite (or because of?) her quirkiness, Luna quickly becomes one of Harry’s most faithful friends. At the end of the year, she accompanies Harry and the rest of the group when they break into the Department of Mysteries, and she more than holds her own in battle. She continues to be a good friend to Harry and a key part of the resistance against Voldemort for the rest of the series. No matter your first impression of Luna, we hope you’ve learned to love her as much as we do!

Although Luna wears her Ravenclaw robes most of the time, we do get to see a few of her Muggle outfits in the movies. You might not think that this particular ensemble would belong to one of the most powerful witches at Hogwarts, yet somehow Luna manages to look perfectly adorable while wearing it (and we’re sure you will, too!). We designed this Plus Size Deluxe Luna Lovegood Costume to imitate her eccentric style. It includes a pink tweed jacket with brown buttons and black cuff buckles. The bottom half of the outfit consists of blue leggings, striped leg warmers, and a multicolored animal-print skirt. Add a pair of Luna’s iconic pink Spectrespecs (sold separately) to will tie everything together and solidify your identity as our favorite Ravenclaw. Then add a wacky pair of shoes and a wand, and you’ll be ready to feed a Thestral—just watch out for Wrackspurts!

For all her weirdness, Luna Lovegood is an intelligent witch who definitely belongs in Ravenclaw. When you put on this Plus Size Deluxe Luna Lovegood Costume, we hope you’ll feel as quirky and powerful as this awesome character!