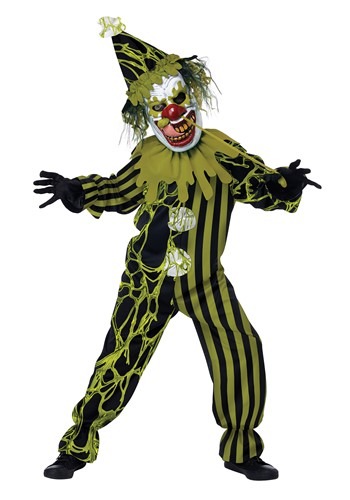 Information
Sale - Save 43%
Items Out Of Stock
Recommended Accessories

You may have heard the term “snot-nosed kid” before but how about “snot-nosed clown”? It’s not as funny as you might think. In fact, it is actually quite terrifying!

Just take a look at this Booger the Clown Costume. This germ-covered jester has plenty of jokes but you won’t want to hear the punch line. Typically it ends with you having a face full of phlegm. We are all for comedy but that is just gross.

However, if your little one is into that then this is the perfect costume for him. He can gross out everyone in town and get candy from them at the same time when he goes trick-or-treating this Halloween.

If your child is ready to join the circus of unhygienic horrors then he is just one snotty outfit away. Start his transformation when you toss this jumpsuit on him. It is black and booger green. Half of it has a striped design while the other half looks like a mucus-covered mess.

Aside from the jumpsuit, the costume has a handful of accessories that are included. The collar looks like what you might find in a used handkerchief. Thankfully it will stay put with the help of elastic, not stickiness. Then you can add the fearsome vinyl clown mask. Not only does it have a gritty smile molded on it, but it also has even more snot covering the eyes and nostrils. Finally, top off this costume with a nasty take on the classic cone-shaped clown hat.

Hygiene’s Out the Window

You were always taught to sneeze into your elbow and away from others. Not Booger the Clown. He loves getting his snot all over everything. Tissue paper is nonexistent in his world. Your kiddo can cover the neighborhood in goopy green mucus this Halloween with a clown costume unlike any other!