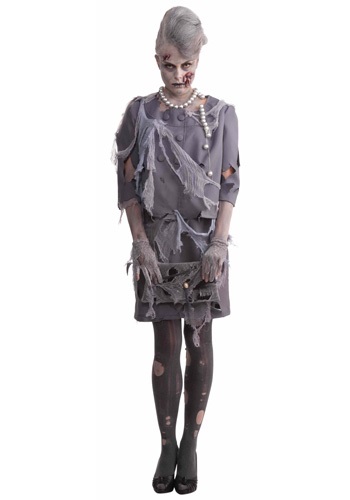 What is scarier than a woman who has been wronged by her future fiancé? He lied, cheated, and ultimately killed her, so she has some unfinished business. We asked what was scarier than a wronged woman, and our answer is simply, and undead wrong woman.

Well you know what they say, 'hell' hath no fury like a woman's scorn' so this lady must have been scorned really badly! She's back from the depths of hell to seek revenge on her two-timing husband. Wreak havoc while you're dressed in this Zombie Woman Costume! Pick up a toy knife and the grey bee-hive wig for the ultimate frightening zombie look!

This costume has a nice grey jacket with large buttons and a spacious, wide collar. Gauze hangs from the grey ripped up jacket, making it look like you just rose fresh from six feet under. There is an elastic band within the stitching of the skirt, for maximum comfort. The skirt also comes complete with rips, tears, and attached gauze. Pair this costume with ripped up tights and some sensible shoes, so you can chase down your unsuspecting prey! Add some fake pearls, fancy gloves, and a nice purse to add a little bit of class to your costume. If you want to add some spook factor into your costume, make sure to have some fake blood and prosthetic makeup, to look like a convincing, scary zombie!