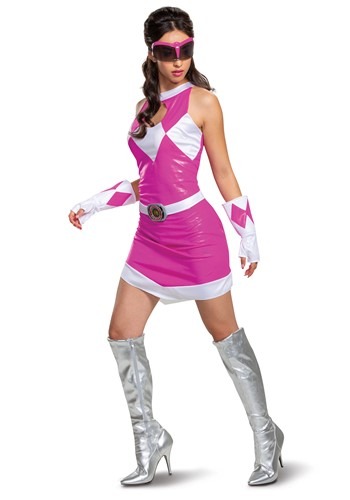 Everyone knows the Power Rangers, and everyone has their favorites. Maybe it's the Red Ranger, who's usually the leader and has some pretty cool moves. Maybe it's the mysterious Green Ranger, who starts off as a bad boy and turns into one of the greatest Rangers of all time. Each character is multi-faceted and has tons of reasons to like them.

The Pink Ranger is the best Power Ranger for a lot of reasons. For one, she is brave enough to dress head-to-toe in pink while going into battle. Most people would think that pink isn't a very intimidating battle color, but they've never seen the Pink Ranger back-flipping towards them! The Pink Ranger has a distinct fashion sense, and she's going to stick with it, whether she's defending the world from mysterious alien ooze or fighting off giant flying monkeys clad in golden armor. Fashion goals!

Suit up for your next world saving mission in style with this Women's Power Rangers Deluxe Pink Ranger Costume. Taking its inspiration from the best Ranger of all, the costume dress is pink with white trim and white diamond accents, and it includes a white belt that has a "Power Rangers" buckle. The costume also includes pink-and-white fingerless gloves and a pink half-face mask. Through on some pink-and-white boots, and you'll be ready to start doing backflips yourself.

There are plenty of superheroes with iconic looks, like Batman and Wonder Woman. But we say no one is more stylish and instantly recognizable than the Pink Ranger! When you show up to your next costume party dressed like her, you're sure to stand out!