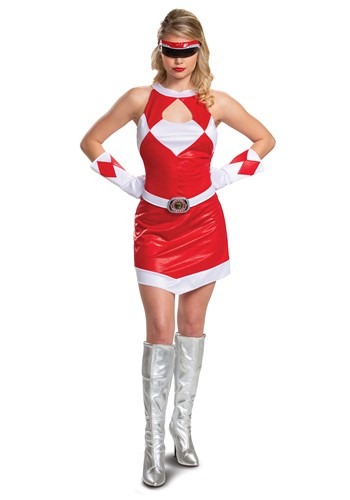 Do you really love the Power Rangers? Or at least kind of know they exist? Maybe you can kind of recall hazy memories of watching an episode or two on Saturday mornings, when you were visiting your cousins and that's all they wanted to watch. You couldn't really list the names of any of the Ranger characters, and you don't even know if you saw the original show or one of its bazillion spin-offs. But there is one thing you're certain of, and that's that there was a Red Power Ranger, even if you don't remember much else about that guy's (or was she a girl?) outfit. Maybe it had white accents? Oh, it had silver go-go boots. You are certain of that!

The next time you want to dress up as an instantly recognizable pop culture throwback, without worrying too much about actual accuracy, we have the perfect costume for you: this Women's Power Rangers Deluxe Red Ranger Costume. Sure, you could go all-out and really recreate the Red Ranger's iconic look, but that sounds like a lot of work, and the original costume doesn't leave much room for your own personality. How can you look cute when you're covered head-to-toe? How can you show off matching red lipstick behind a full face mask?

You can have the best of both worlds with this Women's Power Rangers Deluxe Red Ranger Costume. The dress borrows elements from the original Red Ranger costume, including the red-and-white color scheme and white belt that has "Power Rangers" written on the buckle, while also letting you show off your feminine assets. (Surprisingly, that wasn't a high priority for the original Rangers...) There are also red-and-white gloves and a Red Power Ranger helmet-inspired visor to cover your eyes and totally protect your identity. Throw on some authentic go-go boots and you'll be good to go!

Ready to protect the world!

With this Women's Power Rangers Deluxe Red Ranger Costume, you'll be ready to join the rest of the Rangers and defend the world from any threat! You might not exactly match the rest of the gang, but no one can cramp your style!