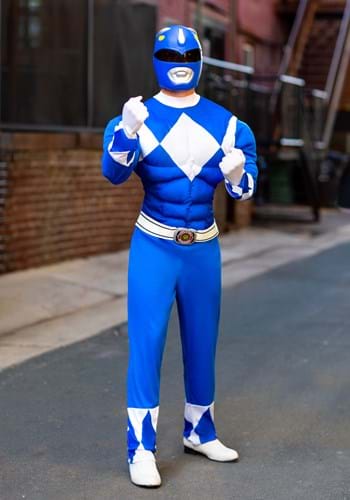 We’re going to lay it out for you. Billy Cranston, AKA the Blue Ranger, is by far the best Power Ranger in the history of the Rangers. Why? One word: Radbug. In case you’re not in the know, the original Blue Ranger invented the Radbug (short for Remote Activated Drivingzord for Basic Ultra Geomorphology) was a small automobile capable of going from 0 to 3,000 mph in less than three seconds. Yeah, we all know that Zack can dance and that Tommy Oliver is the rebel without a cause, but can either of them invent something that modern day scientists couldn’t even cook up? Nope. That’s why Billy is the best Ranger to ever serve on the Mighty Morphin Power Rangers.

If you plan on cosplaying as one of the Power Rangers, then there’s no better Ranger to choose than the Blue Ranger. You can make a name for yourself as the smartest member of the group and all you need is this Adult Mighty Morphing Power Rangers costume.

This Blue Power Ranger costume comes with everything you need (minus the smarts which you will be providing) to become the well-known Mighty Morphin Power Ranger! The costume comes with a blue and white jumpsuit that has diamond patterns on the chest, arms, and legs. It also has muscle padding in the chest and shoulders to help give you a buff and tough look for your next showdown with the Putty Patrollers. The belt has the triceratops themed emblem in the center and the included mask recreates the look of Billy’s helmet from the first season of the Saban series.

Once you have this on, it’s up to you to start building a Radbug of your own, or at the very least, you might want to rent a sweet ride so you can drive the rest of the Rangers to the next costume party!