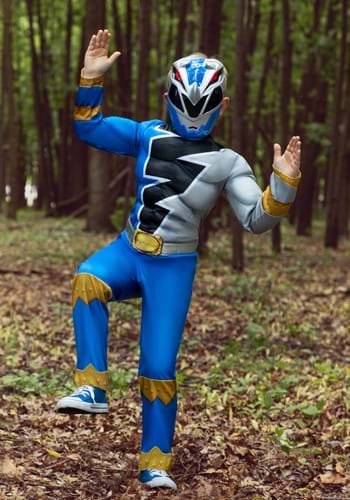 Every kid wants to join the Power Rangers team. We spent a ton of time daydreaming about fighting evil in an awesome super suit and summoning Dino Zords to defeat larger-than-life enemies. Of course, Zordon never contacted us or invited us out to Angel Grove! Our time came and went, and tons of new teams formed and disassembled over the years. Today, all these years later, new kids are having those same daydreams...

The good news is that your child doesn't need a special invitation to join the team. They don't need to discover Dinohenge. They can stop daydreaming and join the Power Rangers when they suit up in this Dino Fury Blue Ranger Costume for kids.

This Power Rangers Dino Fury Costume is officially licensed from the series. The entire costume is inspired by Ollie Akana's suit. It comes with a full jumpsuit with muscle padding in the chest and arms to help give your child a buff and tough look! The jumpsuit fits with fasteners in the back, making it easy for your child to change into. The suit also has the blue and gray color scheme from the show, along with a metallic foam belt attached to the waist. Finally, the costume comes with a molded plastic mask that fits with an elastic band around the back of the head. It all comes together for an iconic look that will have your child ready to fight the forces of evil!

Your child can indulge in their dream of becoming a Power Ranger... and maybe there's still a chance for you, too! We carry plenty of adult Power Ranger costumes, so you can realize your dream of being a Ranger as you head out on new adventures with your little one!