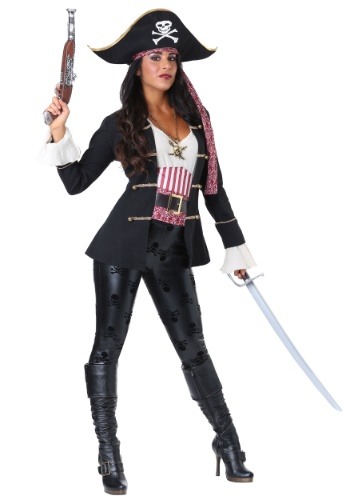 A Big Deal on the Big Blue

Is the pirate's life for you? Here at Halloweencostumes.com, we fight the idea that pirating has more to do with downloading movies through illegal means than exploring the high seas. But we're sure you're stuck in the romantic past just like we are. How can something as boring as downloading media compare to battening down the hatches and fighting the authority of the British Naval force? Sure, not all pirates were good guys. In fact, not all pirates were guys! Anne Bonny and Mary Read are ranked among some of the most infamous pirates in history. They fought alongside their crew, acting just as fierce and capable as the rest of them! The thing is if we want the title of "pirate" to continue to stand for the character that we see come alive today then you'll need a memorable pirate costume to keep that tough, high seas sailing image fresh in the minds of the people!

You'll be the roughest and toughest on the wild modern seas with this sleek pirate costume that's Made-By-Us. This ensemble is a layered and detailed look features a captain's jacket, skull patterned leggings, and of course, the classic pirate hat. The blouse is layered under a striped and skull patterned sash and faux leather belt. Pirates might not control the high seas anymore but those landlubbers better watch out when you show up!

Have you always wanted to run a crew? Gather up your mates put together a pirate crew. Cause everyone knows that there ain't no party like a pirate party. Plus, you get bonus points if you get together on a boat and pay for grog with gold coins. No one on board? No worries, when you're heading out in such a gorgeous pirate costume, people will be signing up to work for you in no time!