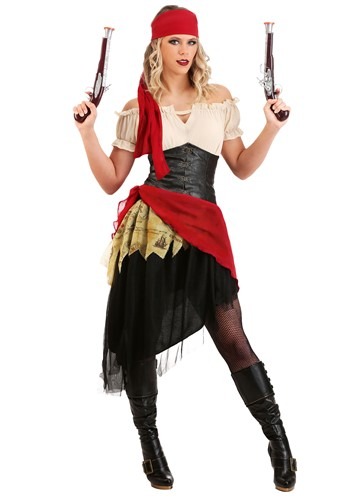 Do you know why the horizon at night gleams with a comforting red glow? The reason, according to legend, comes down to the fierce qualities of the Queen of the Sashes. The story goes that a mighty pirate set to the sea to explore every last corner of the world. Each place she visited, she would demand that the inhabitants there offer her the gift of a sash. Those who complied were given treasures and praise, such that they raised up sashes of their own all over their home. Those who refused? Well... let's just stick with happy stories, for now!

And, yes, technically, the red glow is due to the diffraction of sunlight and the fact that red waves of light can travel longer and avoid being scattered far off into the atmosphere. But let's stick with the tall tale for now. We're thinking a bright red sash might just add the perfect pop to a classic pirate woman costume, so we did just that when we designed this Women's Beautiful Buccaneer Costume. This style might not turn you into Queen of the Sashes, but we're sure it will make for a memorable Halloween!

Set sail to glory with this Beautiful Buccaneer costume. This fantastic costume was designed by our own legendary costume design team after they returned from the very same far corners and learned of this sassy sailor. This Made By Us look features a ruffled top with a dark corset and an asymmetrical black skirt with tulle and lace accent. Channel your own Queen of the Sashes style with the dark red bandana and follow that up with two sashes for your waist: one a printed pirate map and the other a matching red, woven fabric.

Sail the seas, claim the cabin, and master the maps of mysterious places all over the world when you feel fierce and powerful in this unique pirate costume. Sashes-a-plenty and maps galore, you're going to have looks for leagues in this!