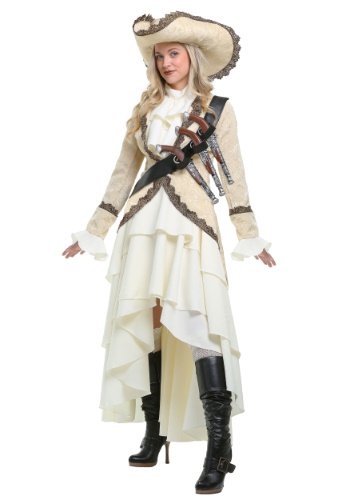 A good pirate has two personas, one for land and one for the sea. The pirate at sea should look as fierce as possible with hair askew, scars showing, and weapons at the ready. After all, when you roll up to that treasure-laden merchant ship you want to make sure that their captain knows that you're a group of tough Buccaneers that are worth their salt. Here's a little secret: while some pirates did live up to their violent reputation many simply intimidated the crews of a ship into giving them all their riches. Looking tough was most of the battle most of the time!

Well, the Captain of a pirate crew can't be greasy and scary all the time. What's the point of having riches if you can't go ashore and mingle with the people? Many pirates would have top end finery that they'd save for their trips ashore. Let’s not pretend these pirates were only men, oh no! One of the most successful pirates, due to her strictly enforced code of conduct, was a woman from China that ran a bigger fleet of ships than her country's Navy. We bet she had some stunning outfits for rendezvousing with the authorities to pay them their bribes. So, whether you're anchoring in wild Tortuga or the civilized ports of Portugal if you're wearing this ensemble people are sure to believe you got those diamonds you're pawning through only legitimate means.

You'll look like the epitome of a sophisticated captain of the 1600's in this ivory lace-trimmed jacket and white layered skirt. You'll retain that sense of authority with the wide brimmed hat while the cross belt with room for three weapons of your choosing will let those equally two-faced authorities know that you're no one to be trifled with. Just be sure to have fun with your sharp new look, after all, what's the pirate's life for if you can't have any fun with it!