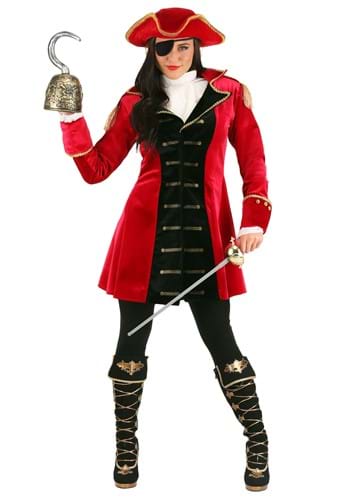 We'll Get Him This Time!

Curse that Peter Pan! He's such a little nuisance, always flying about and picking on honest pirates. He and all the Neverland boys need to be put in their place, so the crew can finally concentrate on getting off this bizarre island and going back to being the terror of the High Seas. That's why it's finally time for a little feminine craftiness. You're probably used to the blundering of the old Captain Hook, but this new Captain has a trick or two up her sleeve! She'll have the problem solved faster than you can say "pixie dust."

Why settle for being the scourge of the Spanish Main when you can rule both earthly and fairyland seas? Strut the decks with confidence and swagger in this Captain Hook Costume for Women. The red jacket only bears a slight resemblance to the one you originally stole from one of the King's soldiers (before you murdered him, of course.) Since then, you've tricked it out with gold epaulets, buttons, and braid - nothing but the finest for the finest pirate in history! A crisp off-white cravat shows that even though you're a salty dog, you appreciate the finer things of life. As for the eye patch, well, losing a little thing like an eye will never get you down when you have such a nice accessory as this!

Grab your favorite boots, your hook, and your blade of choice, because it's time to conquer Neverland for once and all! Just beware the sound of ticking - and for goodness sake, get someone other than Smee to be the lookout! He's always falling asleep.