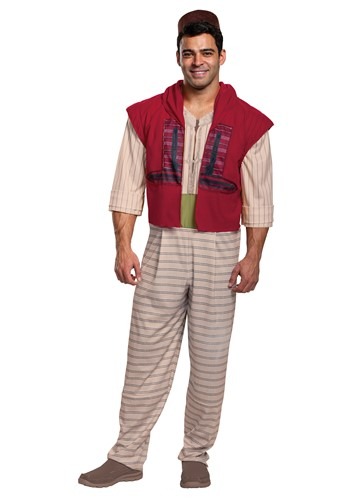 Aladdin hasn't always been lucky. He spent most of his life scraping by on the streets of Agrabah. He had to steal bread just to keep fed and the law was always on his tail. Of course, that all changed the day that he stumbled upon a simple-looking lamp during a slightly haphazard adventure. A little rub and... BOOM! Out pops one crazy Genie. Luck turns around real fast when you have an all-powerful Genie at your command.

After that, he starts to see a marked improvement in his love life and his financial situation. He did have to battle it out with an evil vizier... but hey, sometimes you just have to duke it out with an evil sorcerer if you want to have that happy ending! Perhaps you can have a little good luck like our pal, Al, when you wear this officially licensed Disney costume.

Based on the character from the live action movie, this Aladdin Costume turns you into a resourceful "street rat" from Agrabah. It's a tan jumpsuit that recreates the look of Al's clothes from the live action movie, complete with the striped pattern on the shirt and on the pants legs. An attached green belt around the waist helps add a splash of color and the attached red vest adds the final touch to the outfit. Once you have it on, you might just be ready to start exploring dangerous locales in search of a Genie pal of your own.

Make Your Own Luck

Although a Genie can do wonders for your fortune, you still have to make your own luck! Aladdin sought out adventure, which eventually led him to his own good luck. Perhaps your good luck begins by wearing this officially licensed Aladdin costume from Disney! Just put it on and seek out your own adventure!