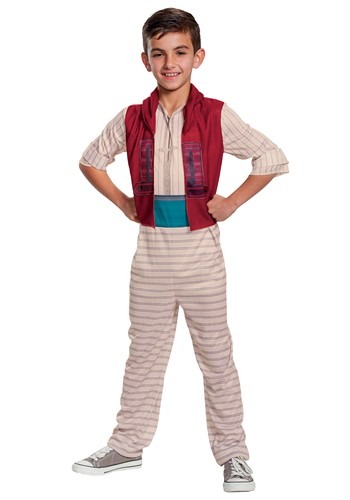 One Skip Ahead of His Doom

Aladdin has amazing luck. Yes, he may have spent a good portion of his life roaming the streets of Agrabah. And maybe he spent a lot of time running away from the law, but look at all the great stuff that's been happening to him lately. He found a hidden treasure room, packed to the brim with cool stuff. He got to meet a beautiful princess, who might just be his new girlfriend if he plays his cards right. He always seems to be just one step ahead of his doom. Oh, and did we mention that he made friends with a Genie and a Magic Carpet? Yeah, he's got that going for him now too, so we think that he's one pretty lucky guy! Of course, he only got such good luck because he decided to head out on a great adventure!

Well, maybe your child can have the same luck as Aladdin! All your little one needs is an adventurous spirit and an outfit to match, like this Aladdin Live Action Costume for toddlers... and a monkey for a best friend never hurts either!

This officially licensed costume turns your toddler into the hero from the Disney live action version of Aladdin! It's a jumpsuit that has printed details on the exterior. The shirt portion is designed to mimic the look of Al's shirt and has an attached red vest over it. The pants portion features printed stripes to contrast the top. The waist has a printed blue-green sash to add a dash of earthy tones to the whole look.

If your child has a thirst for adventure, then it might be time to let him star in his very of fairy tale! With this toddler Aladdin costume, your child will be ready to search for hidden magic lamps!