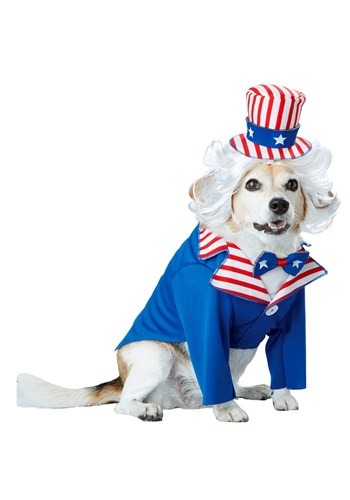 Most dogs aren't that involved in the democratic process. They usually don't even vote on election day, let alone campaign for a certain candidate or tune into political debates. We're pretty sure that your average Fido couldn't name his state representative or his senator, which is pretty embarrassing, really. And don't get us started on how little Fifi knows about the Bill of Rights or presidential succession.

Your dog is different, though! Your dog is a political junkie who lives and breathes democracy. When you wake up every morning, your dog is already reading the newspaper to keep abreast on the latest happenings in Washington. For every issue a candidate brings up, your dog has a reasoned and well thought out opinion. Your dog frequently calls into the local talk radio station to share his thoughts, even though inevitably there is no one on the air who can translate dog. Your dog constantly threatens to move to Canada if his candidate isn't elected, though surprisingly, he hasn't actually done that yet.

It makes sense, then, that your dog would want to dress up like a respected political figure for his next costume party. There aren't many to choose from - in human or dog form - but you've lucked out with this Uncle Sam costume! Everyone loves Uncle Sam!

Show off your patriotic pup with this Uncle Sam Pet Costume! The costume is 100 percent polyester and is made to be a pullover shirt with step-in sleeves. The blue jacket has red-and-white striped lapels and an attached starry bow tie. There is also a red-and-white striped foam hat with starry blue trim, which has an elastic band to secure it under the head. The costume also comes with a curly white wig with an adjustable elastic band as well.

We the People (and Dogs)

With this Uncle Sam Pet Costume, your dog can live out his dreams and inspire other dogs to become more involved in their country. It's a noble effort, and some dog has to do it!