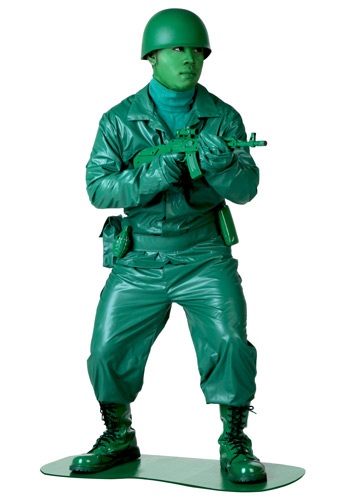 Green army men are the true patriots. Think about it: they are always at the ready, always on guard. Do they even take breaks? Honestly, have you ever seen an army man grab some R&R, or hit the latrine? Do they even eat?! Hang on, now that we think of it, is it possible army men aren't even real men at all? What if they're just genetically engineered soldiers designed to do only one thing: defend. Is that good or bad, morally speaking? Like, do you ever wonder if army men have feelings? But those feelings can never be expressed because they're hidden behind a hardened plastic mask that won't let anything out? And they're just trapped there, always at the ready, while mentally they are just completely spent? Wow, that's actually a really deep, dark rabbit hole. Pull up! We've got to get out of here!

Listen, those little plastic army men are probably not trapped in their own heads, silently screaming to be free. It's actually probably a nice gig, since you pretty much get to chill for... well, forever. And the outfit is so styling, isn't it? Who else is going to be able to pull off the shiny molded look? Not only that, how many people are truly trained in the use of a green plastic rifle? You don't want that weapon in the hands of just anyone. So if signing up for the green army corps sounds right to you and you think you're up for the challenge, then you'd better gear up properly with some green accessories. You don't want to show up to boot in some sorry state, do you? Now move, soldier. On the double!