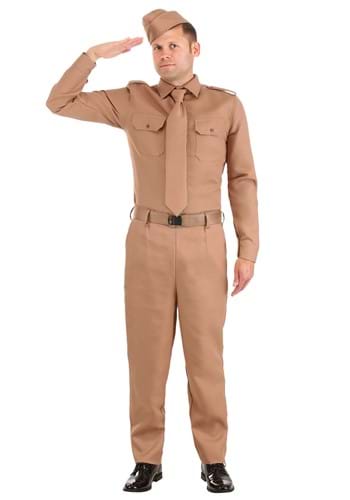 Hear it For the Heroes

World War Two was a hard one. No one can dispute that fact. The war lasted longer than anyone thought it would and caused the whole world to tremble. So you can imagine what it was like when the soldiers who fought so bravely, came back home from foreign shores! In New York, the streets were full of music and dancing and the air was colorful with scraps of fabric from the garment district, used for impromptu confetti. And while we can picture the joy that filled the streets, our hearts really climb into our throats when we think about the soldiers returning to their home towns and families. These hardworking heroes didn't know if they'd ever see home again. They had been gone a long time, with only letters to keep in contact with the people they loved. And while we're all for dancing in the street and confetti, we're sure it was the embrace of their nearest and dearest that soldiers were most looking forward to!

This khaki uniform will bring you back to the World War 2 era. Made by Us, this historic costume is made with quality in mind so that you can wear it again and again. You'll look just right standing at attention in the khaki colored shirt, necktietie, and slacks. The look is topped with the instantly recognizable hat, so you'll be ready for inspection as soon as this costume arrives at your door!

Maybe it's just us but there's nothing like an old-fashioned ticker tape parade. The ladies have their hair in victory rolls, strangers are piled in together on top of monuments, trucks, and on balconies. Everyone is celebrating the same thing! And when you get hold of this World War Two costume, you'll be ready to recreate some of that feeling!