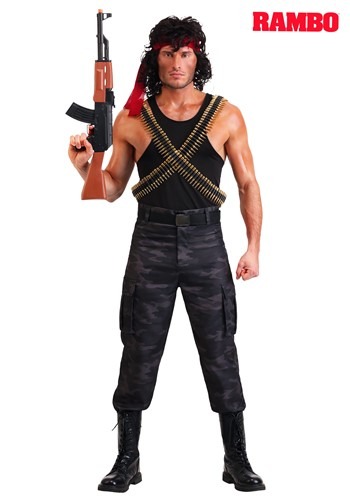 Please Don't Let Me Be Misunderstood

John Rambo looks like a ruffian. His hair is a long, scraggly, unkempt mess. His face looks like it needs a good scrub and his chiseled muscles give him a rough and tough look. It almost looks as though he's spent the last decade roaming a dangerous jungle! Perhaps that's because he HAS spent a lot of time trekking through a dangerous jungle!

Of course, John Rambo is just a decent guy, trying to figure stuff out after his rough stint in the military. He just wants to get in touch with his old army buddy, take in some of the sights of the countryside, and be left alone. One misunderstanding after another leads to conflict and he ends up going full-on Rambo! Well, the good news is that people seem to be a little more understanding these days, so when you wear this John Rambo Costume, you're more likely to get a few compliments rather than get hassled like in the movie!

This exclusive John Rambo Costume is officially licensed and it brings you the look from the 1980s movies. It comes with a simple, dark tank top. The pants have an all-over dark camouflage pattern and feature belt loops at the waist to fit the included belt. Finally, the red bandana ties around the forehead to create an authentic look from the Rambo films, turning you into the anti-hero.

When you wear this John Rambo Costume, expect to get compliments from 80s movie buffs. Just make sure you don't go wandering around Hope, Washington when you wear it... unless you want another incident like in the films! Or at least bring one a of our prop weapons with you to show them that you mean business!