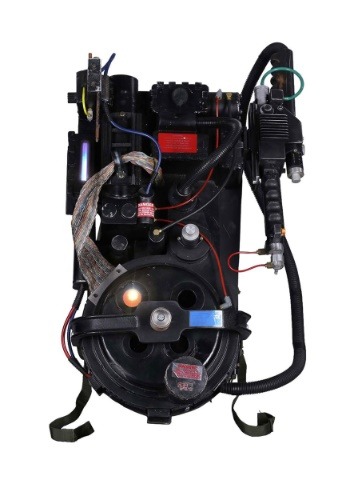 Here, we present to you the engineering feat of the 20th century. The Proton Pack! Crafted by the genius mind of Doctor Egon Spengler (with the help of the bumbling but equally clever mind of Ray Stantz), this masterwork piece of technology makes use of a positron collider to blast an ionized stream of proton energy that can be used to weaken ectoplasmic entities enough to make capture a possibility. Or, in layman's terms, you just point the wand at ghosts and shoot! It's instrumental in the Ghostbusters' arsenal of equipment!

...it also happens to essentially be an unlicensed nuclear accelerator that you wear on your back, so there's no chance we're going to offer a REAL one for sale! However, this Ghostbusters Spengler Legacy Proton Pack by Anovos is a high-quality replica, so it's as close to the real thing that you'll be able to get!

Based on the equipment used by Egon, Anovos took great care in replicating the look from the 1984 film, Ghostbusters. The Proton Pack employs some of the best molding techniques and platinum silicones to capture each detail of the original. Even seemingly minor details were painted onto the pack to match the look of Egon's actual pack. Every crack, every dent, and every smudge is there. The bumper and ion arm have been recreated with high impact resin and metal. It even comes with working toggle switches and buttons on the wand trigger. Each one comes with a certificate of authenticity and a display stand, so you can showcase this piece of art. Make no mistake, this Legacy Proton Pack is the real deal and acts as a centerpiece to any Ghostbusters collection.

Egon truly had one magnificent mind to be able to craft this kind of technology! And while science might not be able to replicate the engineering feat he created in the movie, this Anovos collectible does a near-perfect job of crafting an exact copy of the original.