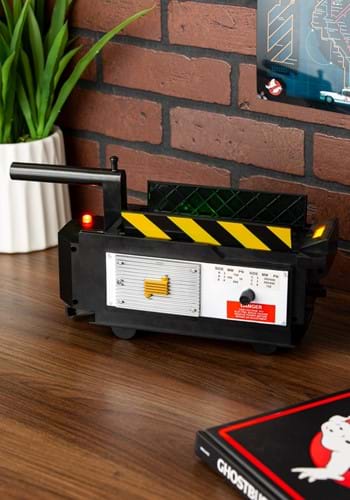 Ever wondered why the Ghostbusters ain't afraid of no ghosts? It's not the cool jumpsuits, or the Ecto-1, or even their experience with Slimer, the green gourmand that has a juicebox named after him. No, the reason they aren't afraid of ghosts is that they have the coolest gadgets in all of the paranormal investigative world! Of course, you can thank Ray Stantz for that. He's the gadget guy on the Ghostbusters. Take the simple Ghost Trap, for instance. They would bust some ghosts with their proton pack, slip a trap underneath, open that bad boy up, and BOOM. No more ghost. They get sucked in the trap and sent off to the containment unit back at the firehouse. All in a day's work for The Ghostbusters.

This officially-licensed Ghostbusters trap accessory looks just like the one seen in the movie, full-sized to go with your costume gear. It's a HalloweenCostumes.com exclusive Made by Us, which means quality and accuracy you won't' find anywhere else. The trap even lights up, makes the recognizable sounds, and the top doors even open up. We think Ray would be proud.

Are you ready to suit up for the season, comic-con, or your next outing to Halloween Horror Nights? Don't get all dressed up to bust some ghosts without the proper gear like this trap.