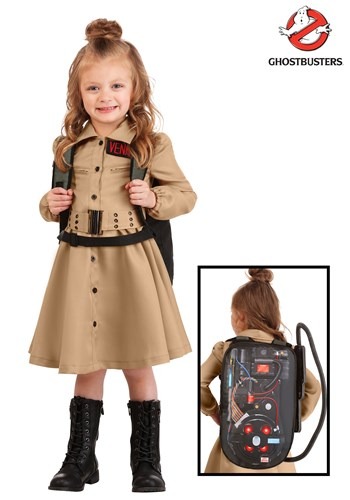 Nobody can really blame kids for being nervous about the mangy monsters that might be hiding under their beds or the creepy creatures living in the closet. But, of all the things that go bump in the night, the ones that are the worst are the strange specters that decide to throw all-nighters in the dollhouse or pull pranks by possessing otherwise innocent stuffed animals. Not cool, ghosts! It's a relief that there's someone else who's way better at shaking things up!

The Ghostbusters have always been a... well, let's just call them a potentially reliable group of folks. They generally know their metaphysical stuff and there's only a 50% chance that they'll change their rules and do the thing they said they should never do. (Plus, they're kinda actually afraid of ghosts, to be honest.) But, rumors are that they've got a brand new member of the team: a youngster that knows a thing or two about ghosts and is ready for some busting!

It's time to let your tyke join up with the spirit smashing crew with this officially licensed Ghostbusters costume dress. Sized for toddlers, this is a Made by Us look that was put together by our team of in-house designers. It is a reinterpretation of the iconic Ghostbusters uniform with an adorably cute twist. The tan color, buttons down the front, and your kiddo's choice of their favorite name tag will make this recognizable everywhere... though it is the proton backpack that really completes the costume!

When ghosts have been pestering a kiddo long enough, they can either be afraid of the spirits or they can turn around and show them who's the boss! Give your tyke a fighting chance with a Ghostbuster costume that's cool and powerful (and cute to boot)!