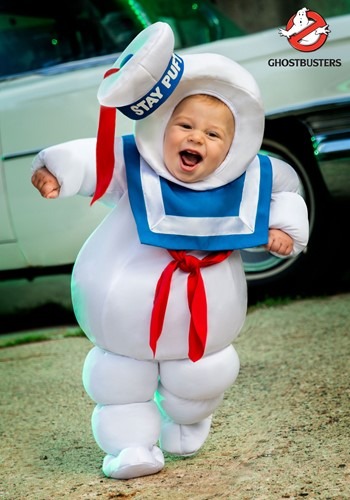 We're not saying that having a baby is all about the dress-up parties. We would never suggest that was the core reason for having a little tyke. That said... we won't deny that there is a certain degree of heartfelt awe that cannot be replicated by anything in the world beyond dressing your littlest babe up as something adorable. The entire world agrees with its collective cocked head and 'aww' whenever it sees a picture of a little one doing something cute!

There is one exception to this rule. If the adorable thing that you're dressing your tyke up as is also a terrifying force that can bring about the ultimate destruction of the world as we know it, then we are talking about something that is even more adorable! Are you ready to choose the form of your snuggly destroyer?

Our design team dreams up all sorts of amazing things, so we're glad that Gozer never showed up to ask them to come up with the form of the destroyer! That said, we're even more glad that they came up with this Made by Us design. This is an officially licensed Stay Puft costume for your infant that is sure to change life as we know it. That's because this comfy, minky bubble suit looks just like the adorable destroyer from Ghostbusters! The pants are stuffed and stitched to give the marshmallow look and the top features a blue and red satin tie and cap to complete the iconic movie look!

Gozer might have been a little miffed to realize that our choice in destroyers would be your little tyke in this adorable Mr. Stay Puft costume. Sure, babes might be able to cause some surprising destruction, but while in this cute bubble costume, we think their powers might actually be reduced... though you'll still be in "aww!"