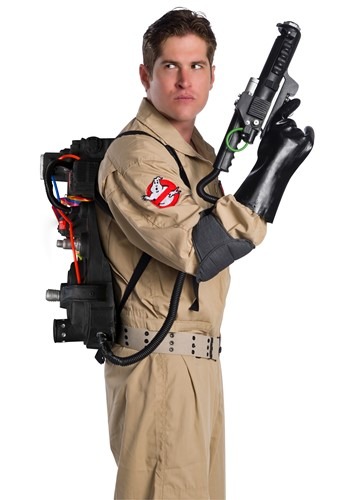 Imagine if the Ghostbusters didn’t have their proton packs. When they went to prevent the apocalypse, chances are, they would have failed. We’d be serving all the ghosts and demons that Gozer wanted to unleash on the world (assuming we had survived). We have to be thankful that the team ignored Sprengler’s warning about crossing their proton streams. Even though it could have brought about the destruction of all living things, we were saved. But, now that Gozer is gone, do we still need those risky proton packs around? Sure, there are still some ghouls that need to be stopped from causing too much drama, but more than 30 years later there should be something safer to use, right? Of course, there’s something safer! We give you the Silly String Proton Pack! Now, before you object to its usefulness, hear us out.

This proton pack is designed to make your Ghostbusters uniform look as official as the original teams’; the look of the mechanics that made the proton pack so powerful are all there, including the Neutrona Wand. What makes this pack safer is the silly string that replaces the proton stream. It may not sound like the best way to capture a ghost, but have you ever tried to clean up silly string? It’s stuck on everything for a terrible amount of time. Aim this silly string gun at any ghastly foe and they’ll be stuck in a mess, giving you plenty of time to vacuum them into a containment unit. Best part, even if you cross silly string streams with a teammate, the world will remain standing!

Don’t risk instantaneous destruction just to capture a ghost. Upgrade your Proton Pack to the 21st century with this Silly String Proton Pack. You’ll be ready to bust some ghosts and celebrate your paranormal victories with some sticky confetti!