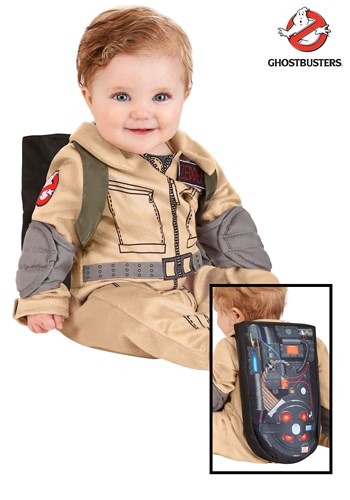 They were told not to cross their proton streams. When they took the risk and did it to close Gozer’s dimensional gateway, they only had hopes about what would happen. Everything seemed all well and good when it was done. Little did the Ghostbuster’s realize that their efforts to save their world had created multiple timelines—some too horrifying to describe and others, well positively wholesome. Our favorite follows the fairy-tale ending Venkman deserves. A life where he and Dana marry and are parents to Oscar Venkman. Oscar shows he is ready, from birth, to follow in his father’s footsteps.

What looked like typical infant staring turned out to be early ghost detection skills. When a gust of wind blew through the window, Oscar could tell his father (somehow) if it was just an Autumn breeze or the arrival of New York’s next paranormal threat. Before Oscar could walk, he had become the most skilled and accomplished Ghostbuster.

This Ghostbusters Jumpsuit is styled after Oscar Venkman’s first uniform. To match the rest of the team, the super-soft jumpsuit features a stitched-on belt and printed pockets that look just like the real thing but don’t provide a plaything that distracts from the task at hand. Elbow pads keep will keep your baby ready to army crawl through any obstacle that’s preventing their ghost catching. The proton pack is detachable in case the foam-stuffed backpack starts to feel too heavy for your tiny Ghostbuster. In this officially licensed costume, your little one can follow in Oscar Venkman’s crawl-prints.

If your little one has been staring into the shadows a little too often lately, don’t be alarmed. Get them into this Made By Us Ghostbusters Jumpsuit and know they’ll be ready to bust any ghost that may be lurking in the corner. And remember, it’s probably not a ghost. But it might be. There’s no way to tell unless your little one catches the thing.