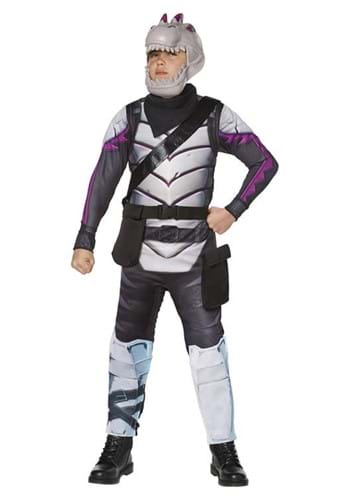 Everybody knows that striking fear into your enemies is satisfying, entertaining, and a crucial step on the road to victory. Where people begin to disagree is in the how-to. Some people go the route of wild, clever, unexpected moves that leave the opponent confused and helpless. Others bring their A-game in a more direct fashion, using strong attacks to instill terror in their foes.

As a dinosaur, of course, you need never choose between the two. Just being near the hulking, monstrous form of the king of lizards is enough to set most people on their heels, but you didn’t stop there! No, you went that extra step of adding the purple and black tints to your bone-plating. Now people aren’t just fighting an extremely large animal, they are fighting an extremely large, darkly glowing Dino! No Hunter, Helga, or Hawk will be able to stand against your aura of power and intimidation!

Like the Tyrannosaurus is the King of all Dinosaurs, you will also feel like royalty in this Fortnite Child Dark Rex costume. The jumpsuit feels as good as it looks and will remind you of why you love the Dino Squad so much. Tearing down forts and melee-ing has never felt as good. Crushing buildings underfoot and chomping them in your gargantuan jaws will impress on your enemies that you are a force to be reckoned with!

Any child who loves Fortnite will love this child-sized Dark Rex costume. It has all the little details that will make him excited to show off to his friends, shortly before annihilating them in the next match!