Christmas has the best stuff. The best decorations, the best cookies, the best music—and, of course, the best movies and family traditions. Just think of all the warm holiday memories you have, including cuddling up by the tree with a big bowl of popcorn in your lap, watching the same movies year after year. (Don't forget mugs of hot chocolate!) Maybe you wear some of these Christmas costumes when you make your family Christmas cards. There are also plenty of ways to include Christmas costumes with the rest of your holiday cheer, whether you're keeping the Santa tradition alive for another year or you're planning to do a live Nativity. Check out these fantastic Xmas costumes and you just might find something for a new family tradition! 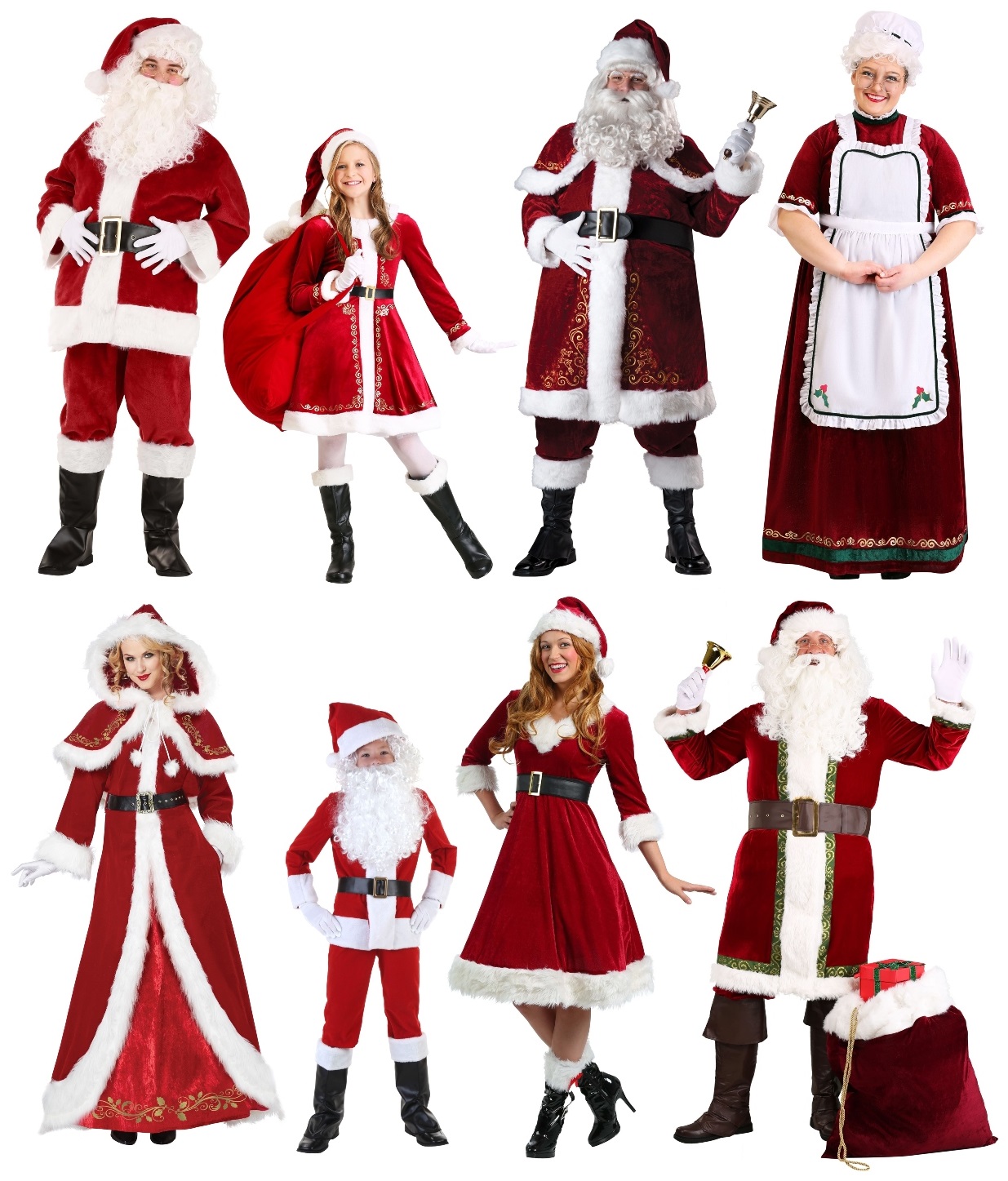 Of course, there are plenty of Christmas movies focused on Santa Claus. From traditional Santas like the one from Miracle on 34th Street or more modern ones like Tim Allen's snarky Scott Calvin from The Santa Clause and Billy Bob Thorton's over-the-top Bad Santa, you'll have enough options to portray in your Santa Claus suit. As iconic as Santa Claus is, It's hard to forget Mrs. Claus. (Honestly, he wouldn't be able to do what he does every year without his best helper!) The two of them have certainly gone through thick and thin as maintaining a seasonal business is tough work. So if you're looking to buy a mall Santa costume, a cute Mrs. Claus costume or you or your kids want Santa costumes to wear at home, you can find the Santa suits to suit your needs online at HalloweenCostumes.com!

How the Grinch Stole Christmas Costumes 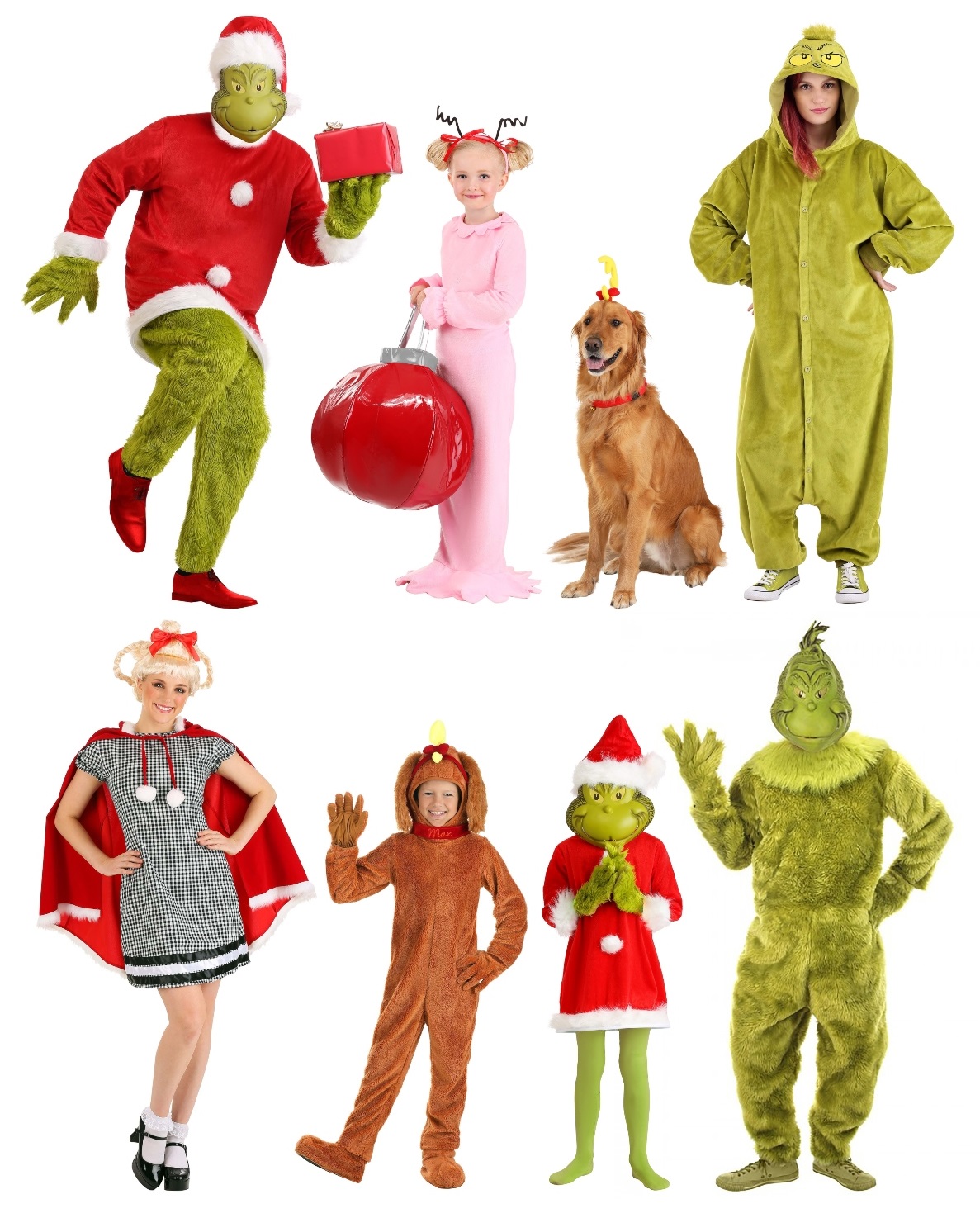 Feeling a bit grouchy about the holidays? If you're thinking about stealing Christmas to make it go away, maybe you'll want to dress up as the Grinch for the holidays. On the other hand, you may want to be a Who from Whoville to try and teach the Grinch a lesson about holiday cheer. No matter the case, these are some of the best Grinch movie costumes for Christmas! Not only are Christmas movie costumes great for the silly family photos on your greeting cards, but they are also perfect for holiday parties. (Who wouldn't accept a present handed out by someone in a Grinch costume or Cindy Lou Who costume?) You can even make the family dog look like Max by equipping him (or her) with a pair of Max antlers for pets! 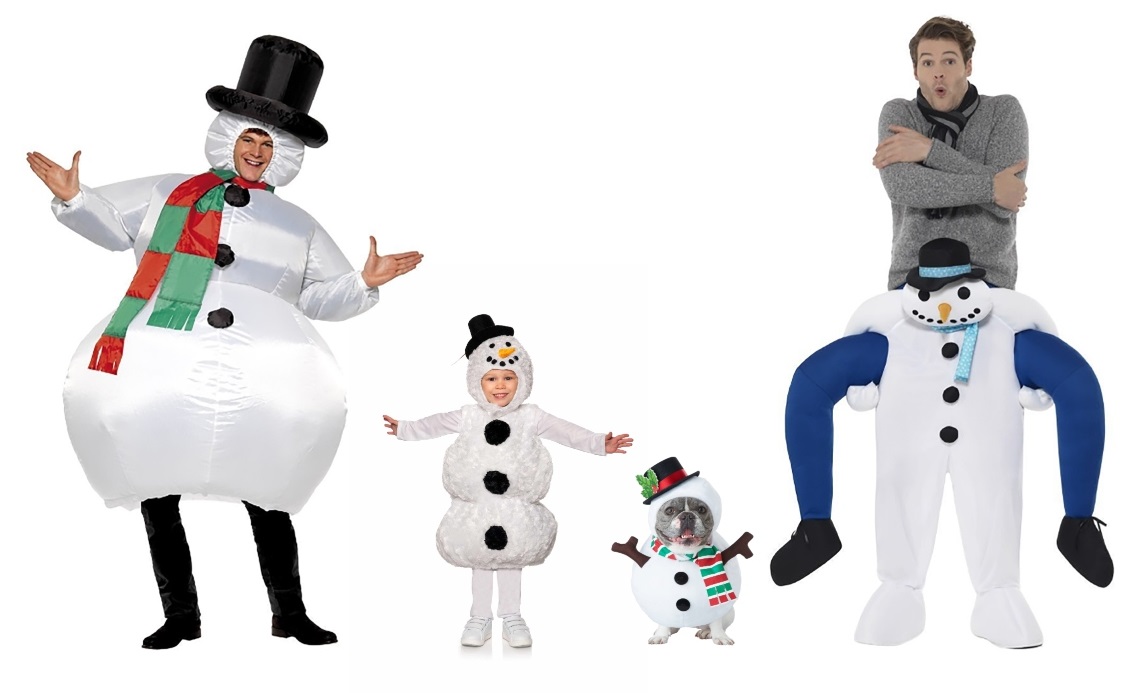 With a corncob pipe, a button nose, two eyes made out of coal, and of course his magical top hat, Frosty the Snowman was a jolly happy soul! Remember all the fun you had building snowmen? This Christmas, add a little magic back into your holiday season when you dress up in a Frosty costume. Kids around you will all want to play when you bring on the Christmas spirit. 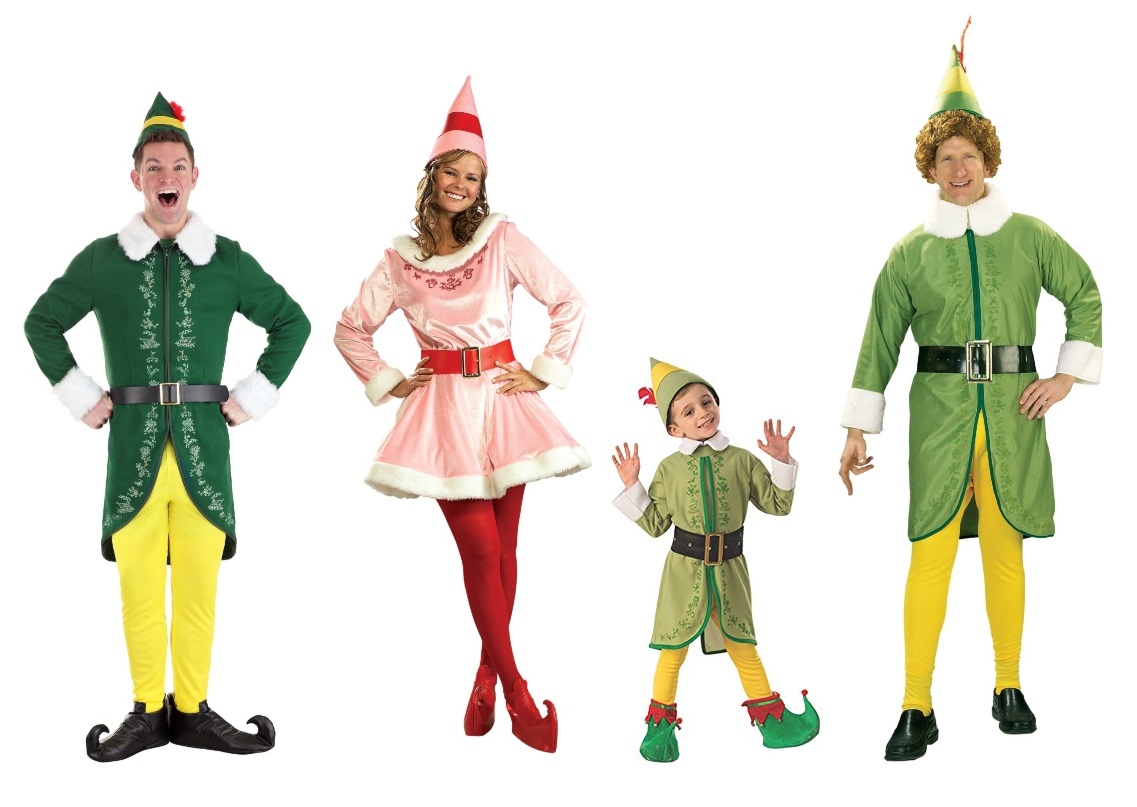 No movie has become an instant Christmas classic faster than the hilarious Elf. You can dress up as Buddy and cut out snowflakes, make your own toys, and consume copious amounts of maple syrup. With that much sugar intake, you'll be spreading Christmas cheer all over the place! Add a Jovi costume to your Buddy costume and you instantly have the best Christmas couples costume! Just be careful crossing the street—the yellow ones don't stop. 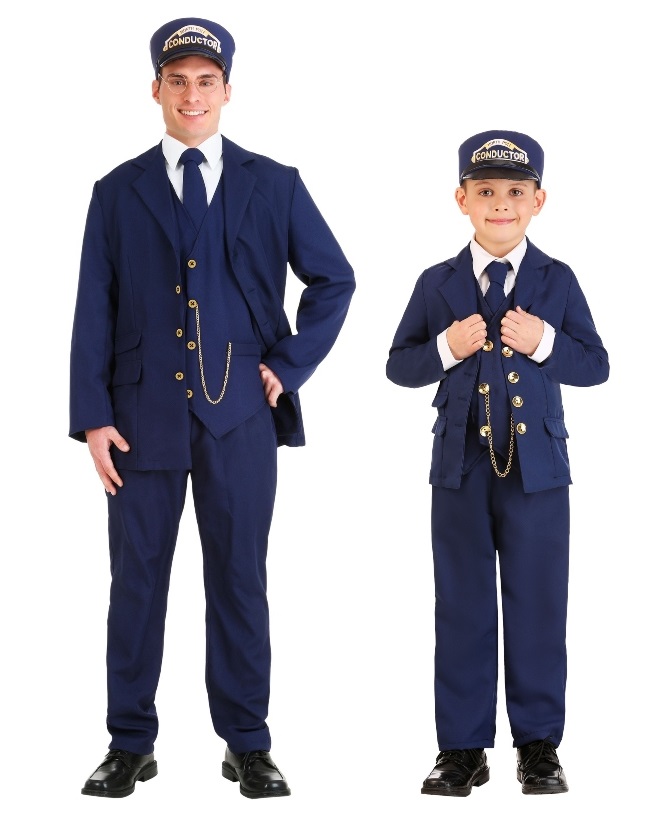 The Polar Express was an animated film released in 2004 based on the classic children's book. Tom Hanks voiced many characters in the film, including the conductor of the Polar Express itself. Dressing up as him, or maybe someone a little bit more recognizable (ahem, Santa or an elf) would be a great treat for book-loving families. If you're not keen on DIY-ing a homemade elf costume or Santa costume to hand out the presents, these Christmas costumes should do the trick! 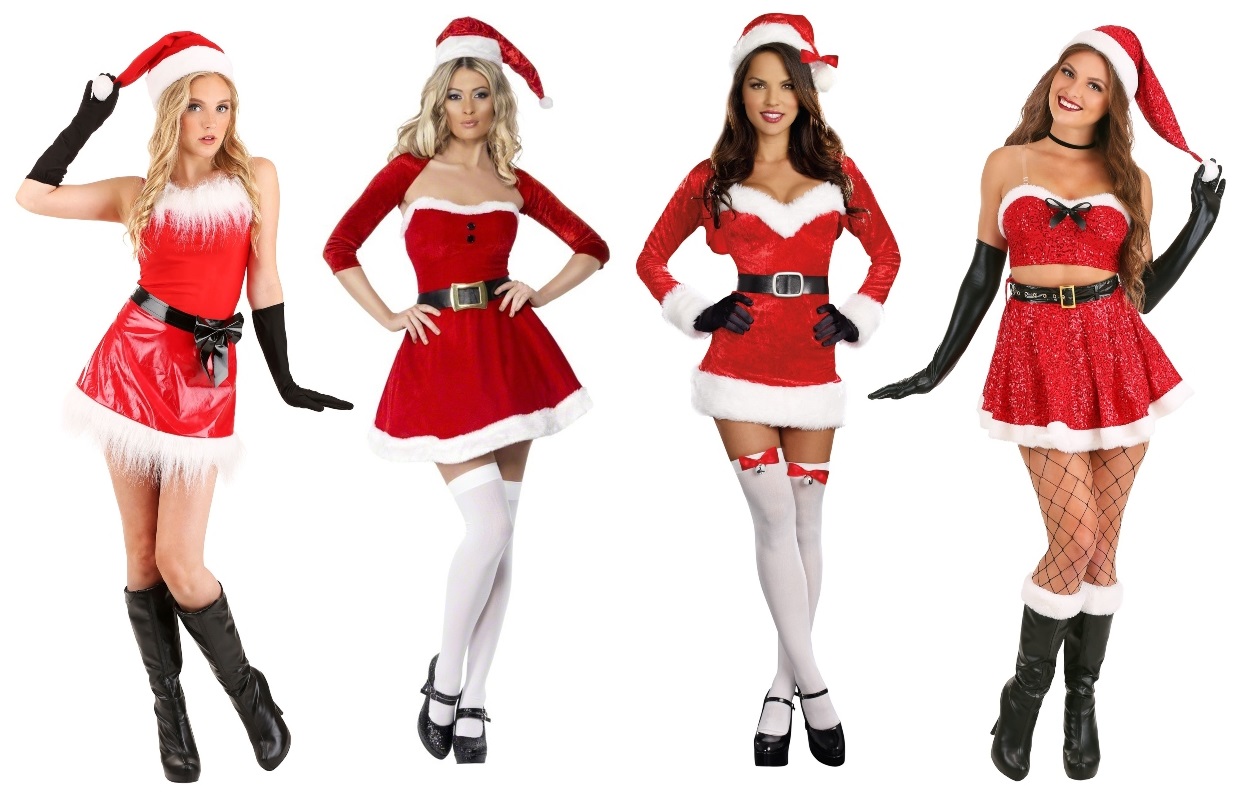 Mean Girls may not be a Christmas movie, but you can get a Mean Girls Santa costume for the holidays. Be just like the Plastics and dress up in these for a performance of "Jingle Bell Rock" or any of your favorite Christmas songs. But on Wednesdays, we wear pink! 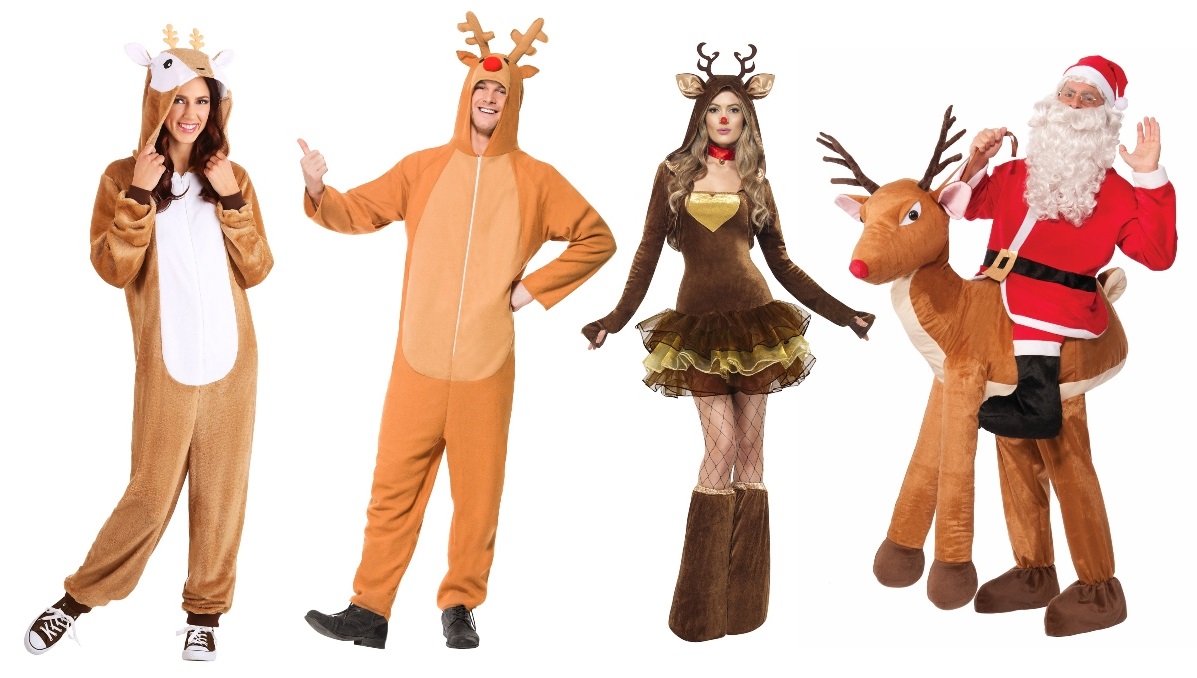 Do you recall the most famous reindeer of all? Don't be left out on the Island of Misfit Toys. Dress up in a reindeer costume as everyone's favorite red-nosed reindeer and you'll light up the Christmas party just like Rudolph lights up the night sky for Santa Claus! These Christmas movie costumes are sure to bring a warm smile to anyone's face. 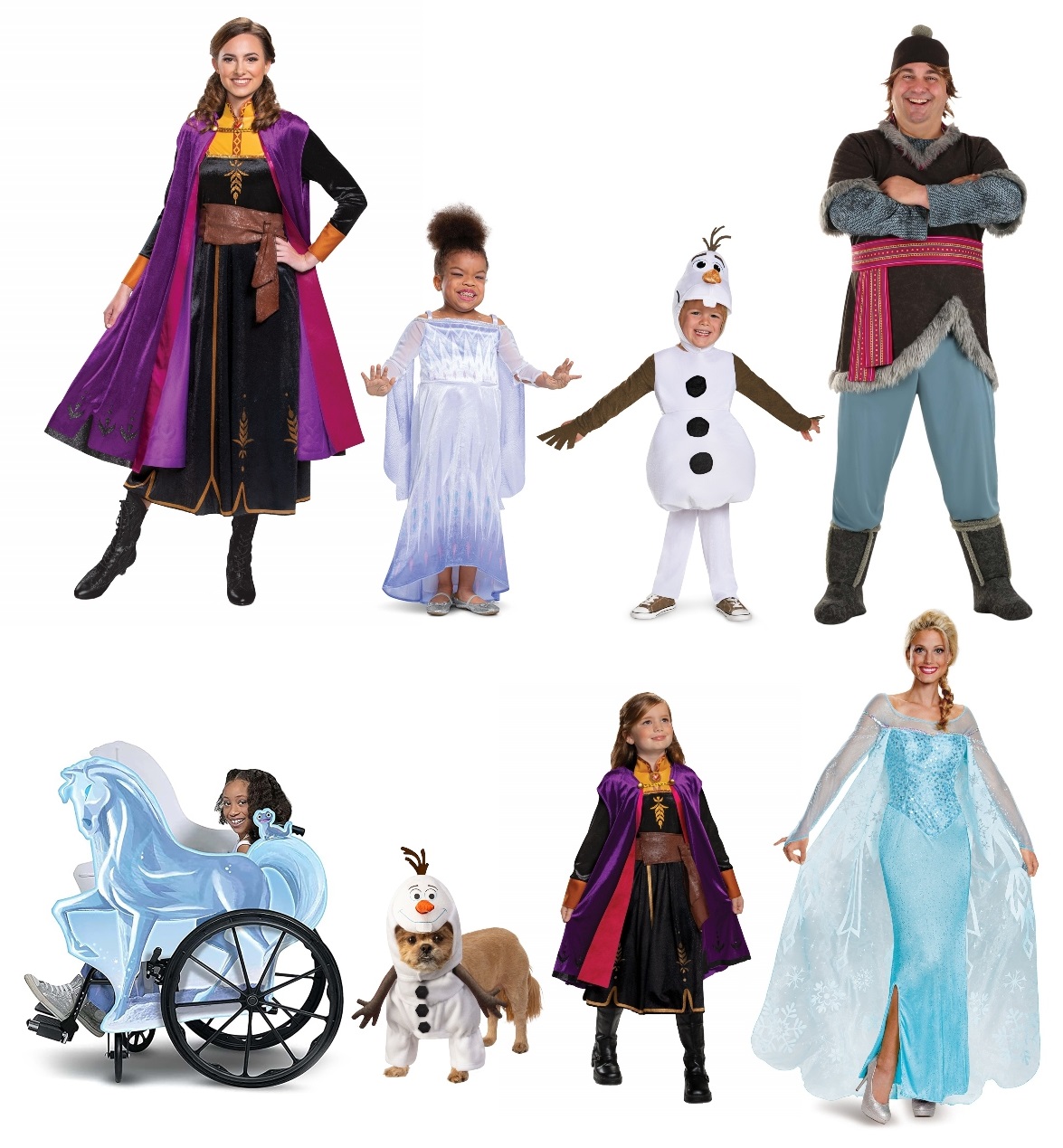 While these might seem like odd Christmas character costume ideas, Frozen is an excellent movie for the winter season. Seeing those beautiful wintery scenes makes you just want to curl up by the fire with some hot chocolate. Besides, the movie includes a message about loving family. So, when you're with family around the holidays, why not get a few Frozen costumes and figure out who is an Anna, who is an Elsa, or who is an Olaf? 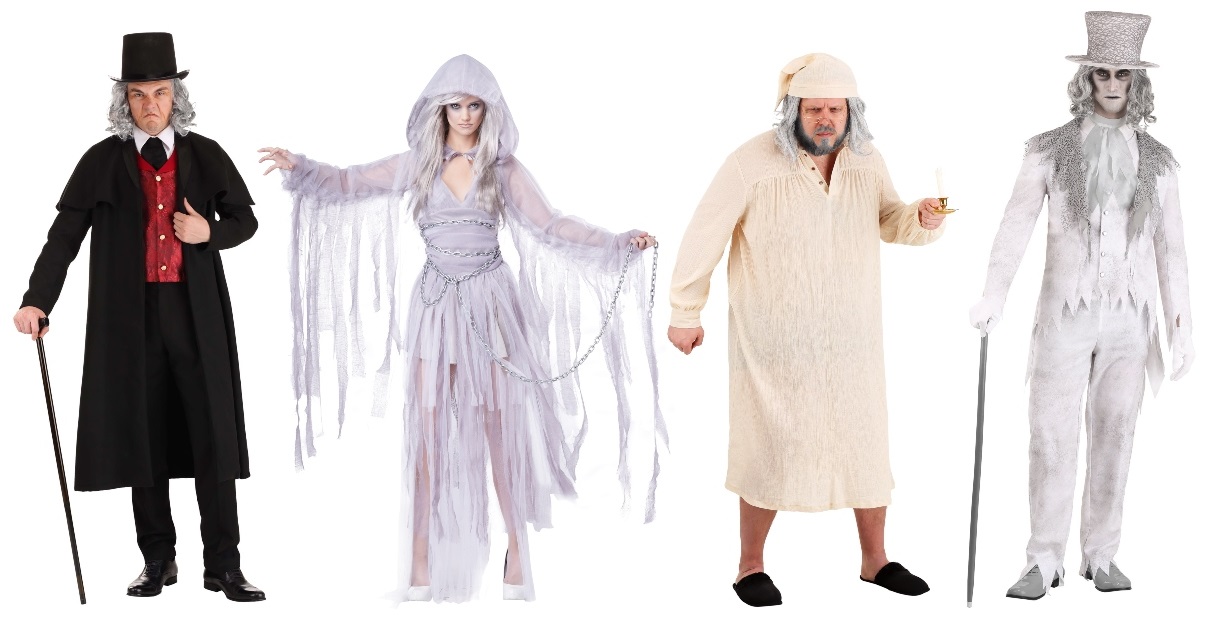 Whoever thought a movie about being visited by a series of ghosts (scary ghosts!) on Christmas Eve night would not only come with an essential lesson for the holidays, but also end up as a timeless Christmas classic? This Ebenezer Scrooge costume is perfect for anyone who has uttered the phrase "Bah Humbug" in late December. Someone could also dress as a ghost if they'd like to portray a haunting presence (or deliver some haunting presents). These Christmas-themed costumes are sure to put some cheer into that humbug. 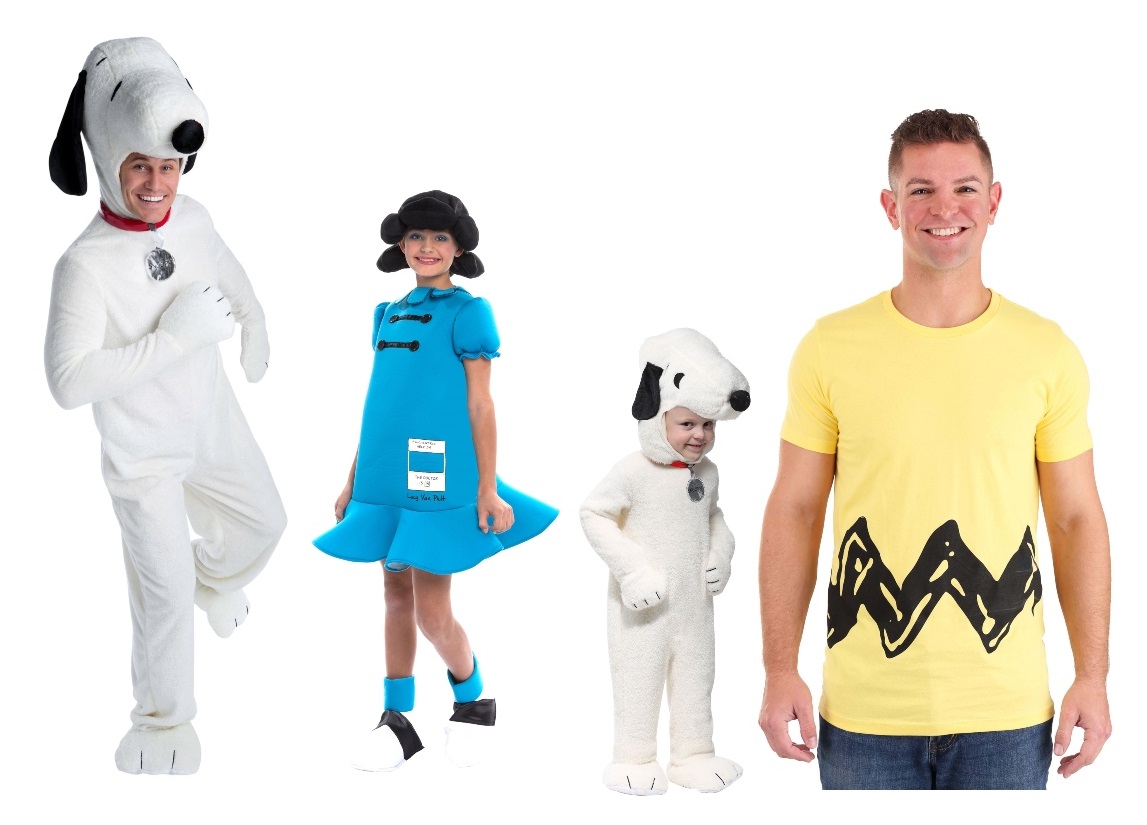 Here's another Christmas classic with an important message! Despite the small, droopy tree and others' obsessions with material objects, Charlie Brown knows the true meaning of Christmas. Want to direct your own Christmas pageant? You can dress up as Charlie himself. If you're more interested in messing with old Chuck, maybe Lucy or even Snoopy would be better options. These also make great Christmas party costumes—they even had a Christmas party in the movie! Pop in the soundtrack and dance the night away like some of your favorite characters. 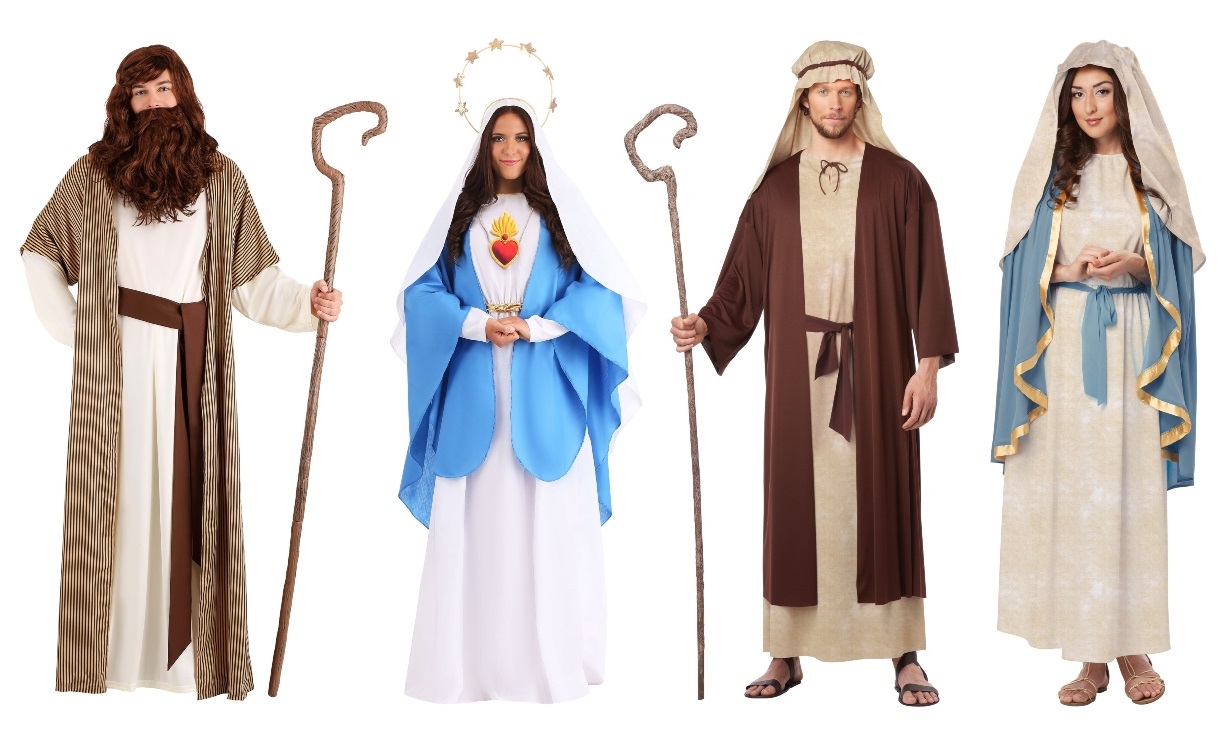 If you hear the word "Christmas" and Jesus comes to mind before Santa, you might be considering some live Nativity costumes for Christmas. If so, you'll definitely want a Mary costume. Pair these Nativity costumes with a pair of sandals and a swaddled baby doll, and you'll practically be ready to go! You will also want a Joseph costume to pair with your Mary costume. Add a staff and some sandals, and your Joseph costume will feel complete. 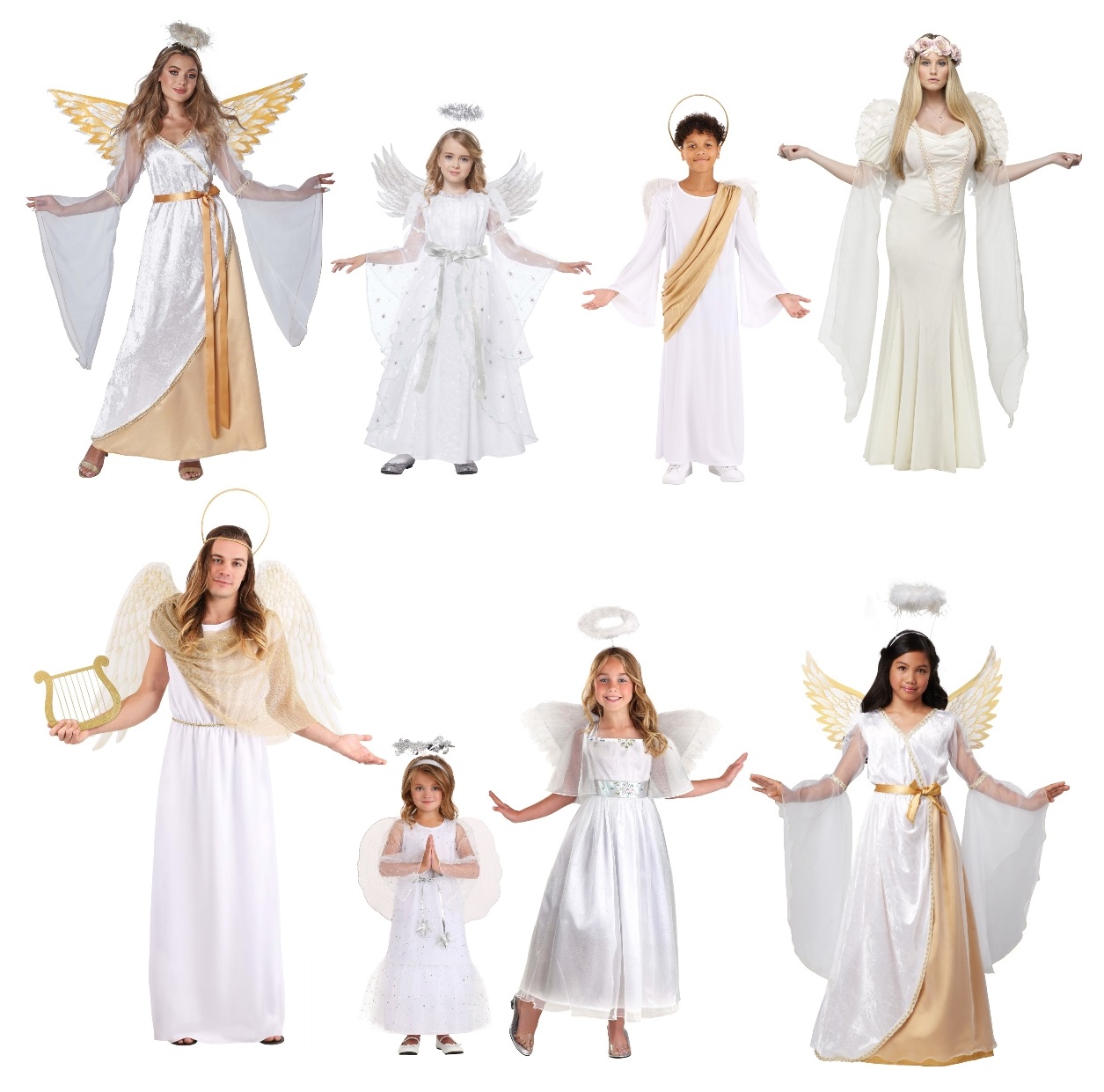 Leave your sexy angel costumes and dark angel costumes at home, because we're going completely classic here. (By all means, though, bring your voice if you're making an angel chorus!) These classic angel costumes are sure to bring a smile to everyone's faces as you sing or recite your lines. A live Nativity scene certainly wouldn't be complete without a host of angels! 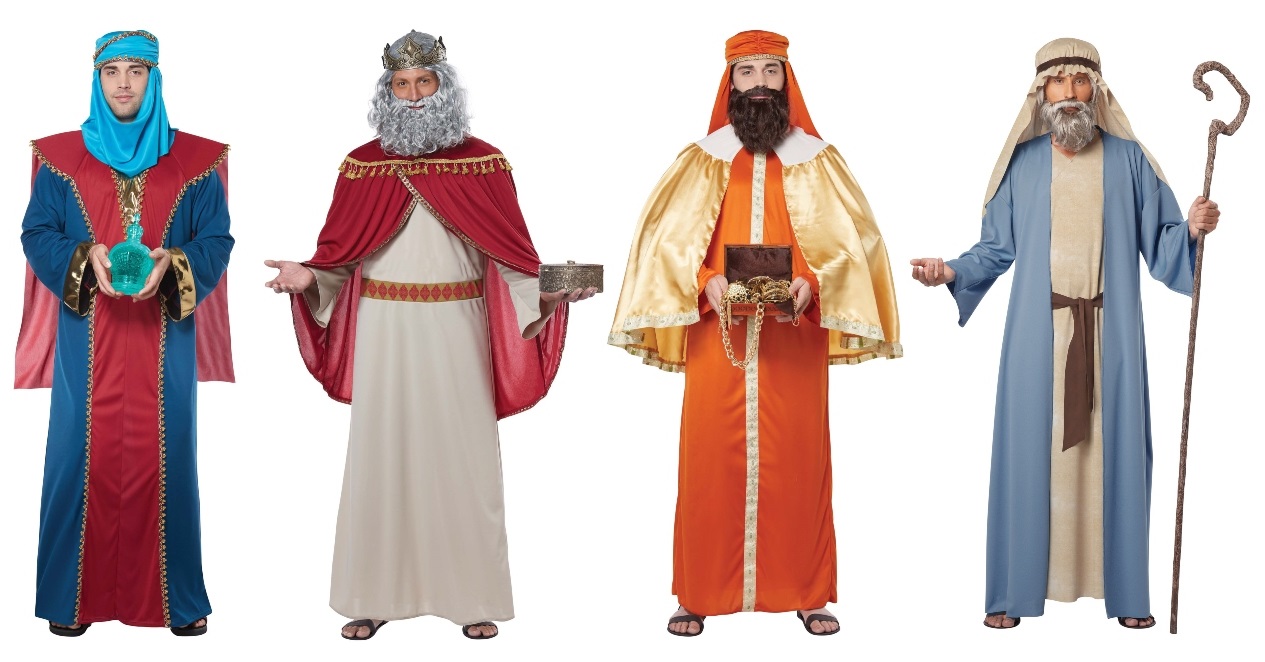 If the angels are at your live Nativity, you'll totally need some shepherd costumes and wise men costumes to flesh out the scene. Don't forget your shepherd crooks and some small containers for the wise men arriving with gifts. Check out these beards and wigs if you're concerned about keeping your character's look on point. 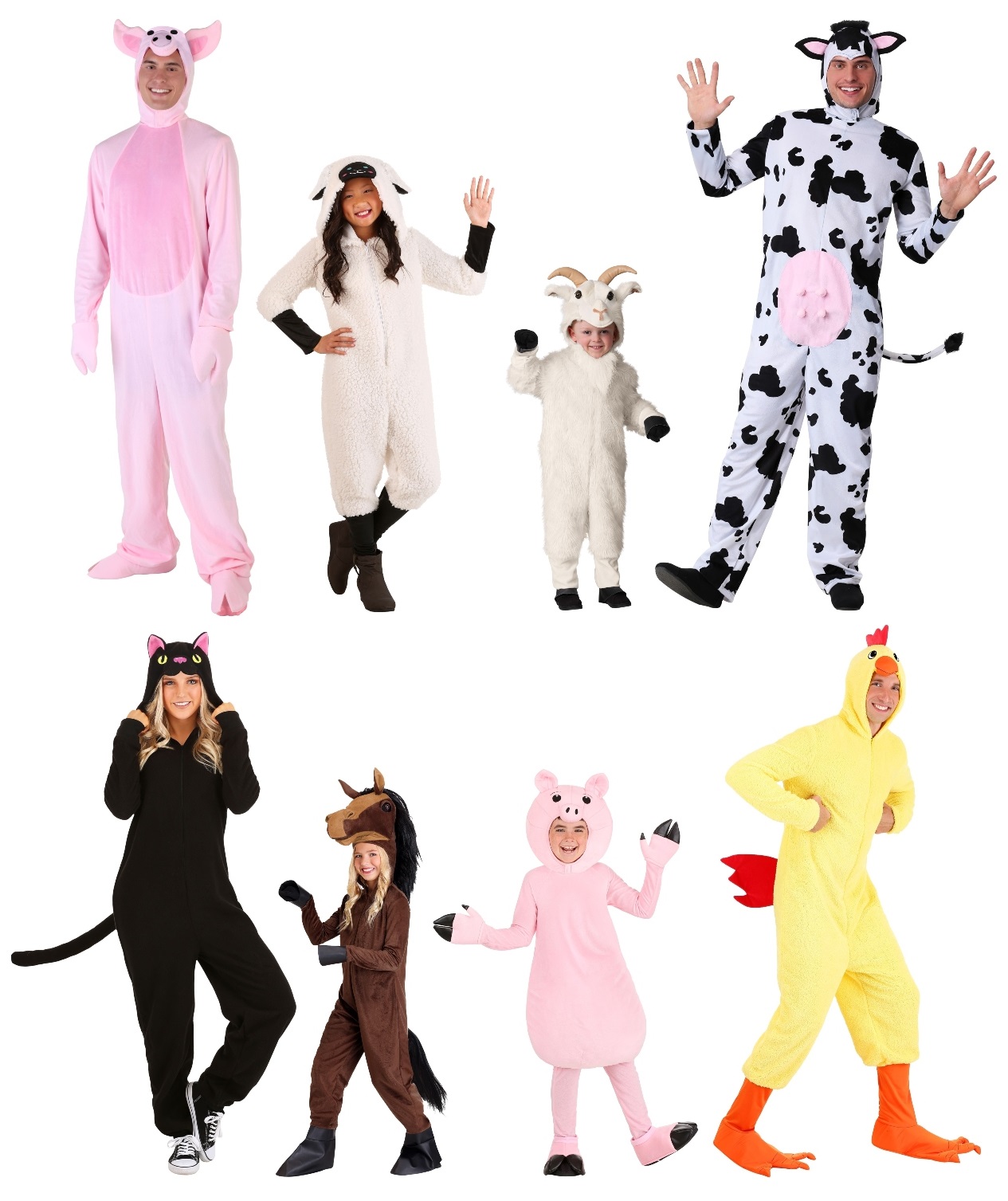 If your live Nativity group won't include live animals, chances are high that you'll need some people to dress in farm animal costumes. (Don't worry, as you'll certainly be some of the coziest characters on the set!) There are plenty of barn animal costumes to choose from, so there's absolutely something there for everyone. It's common to see sheep costumes and cow costumes, but perhaps you might want some horse costumes and goat costumes too!

Other Xmas Costumes That Show Your Holiday Spirit

Nutcracker Costumes for Fans of the Ballet 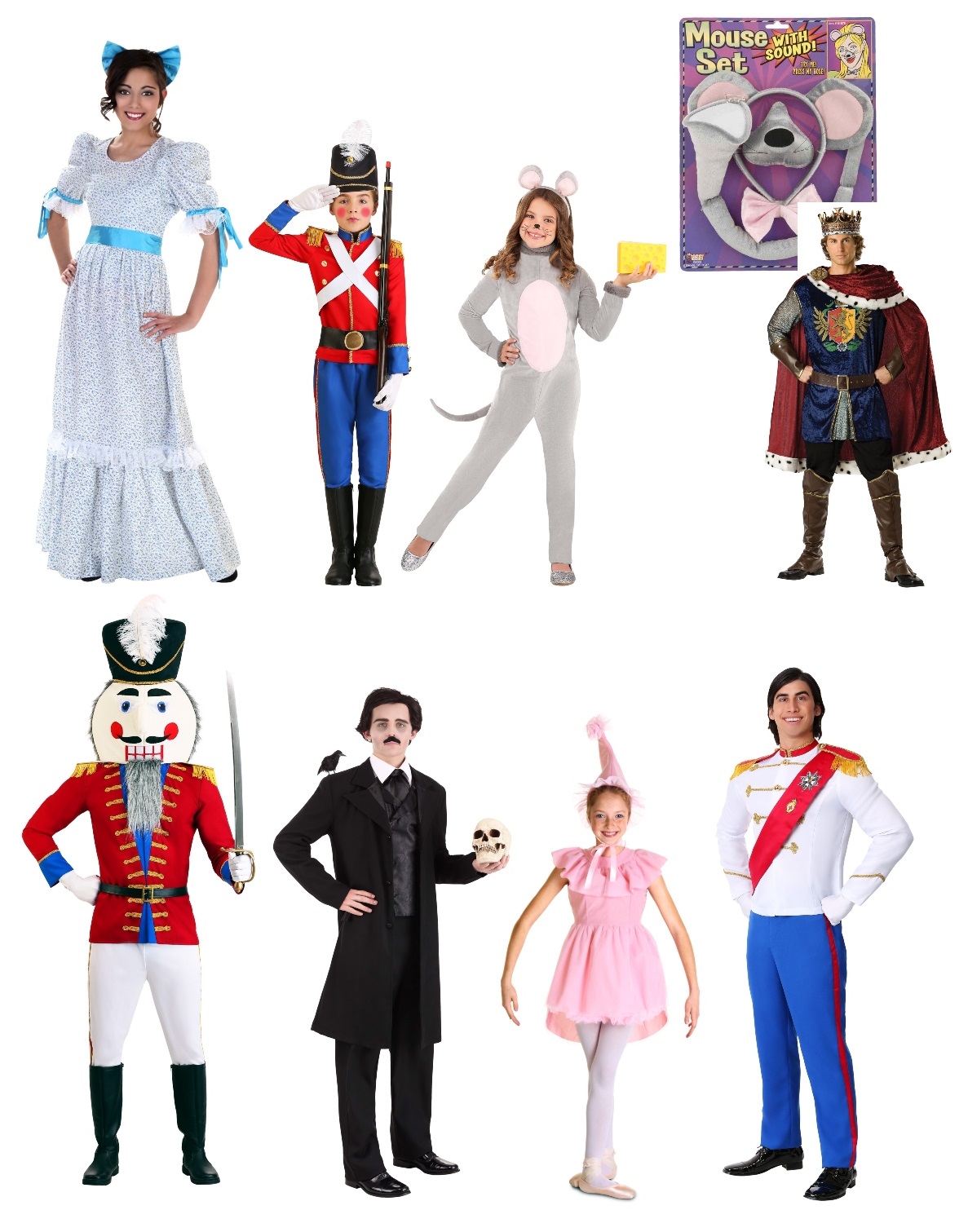 One other Christmas tradition enjoyed by people young and old is watching The Nutcracker ballet. If you want to have a Nutcracker-themed family photo or put on your own production, we have several Nutcracker costumes you'll want. (Don't forget that Uncle Drosselmeyer typically wears an eye patch!)

Christmas Elf Costumes for all the Little Helpers 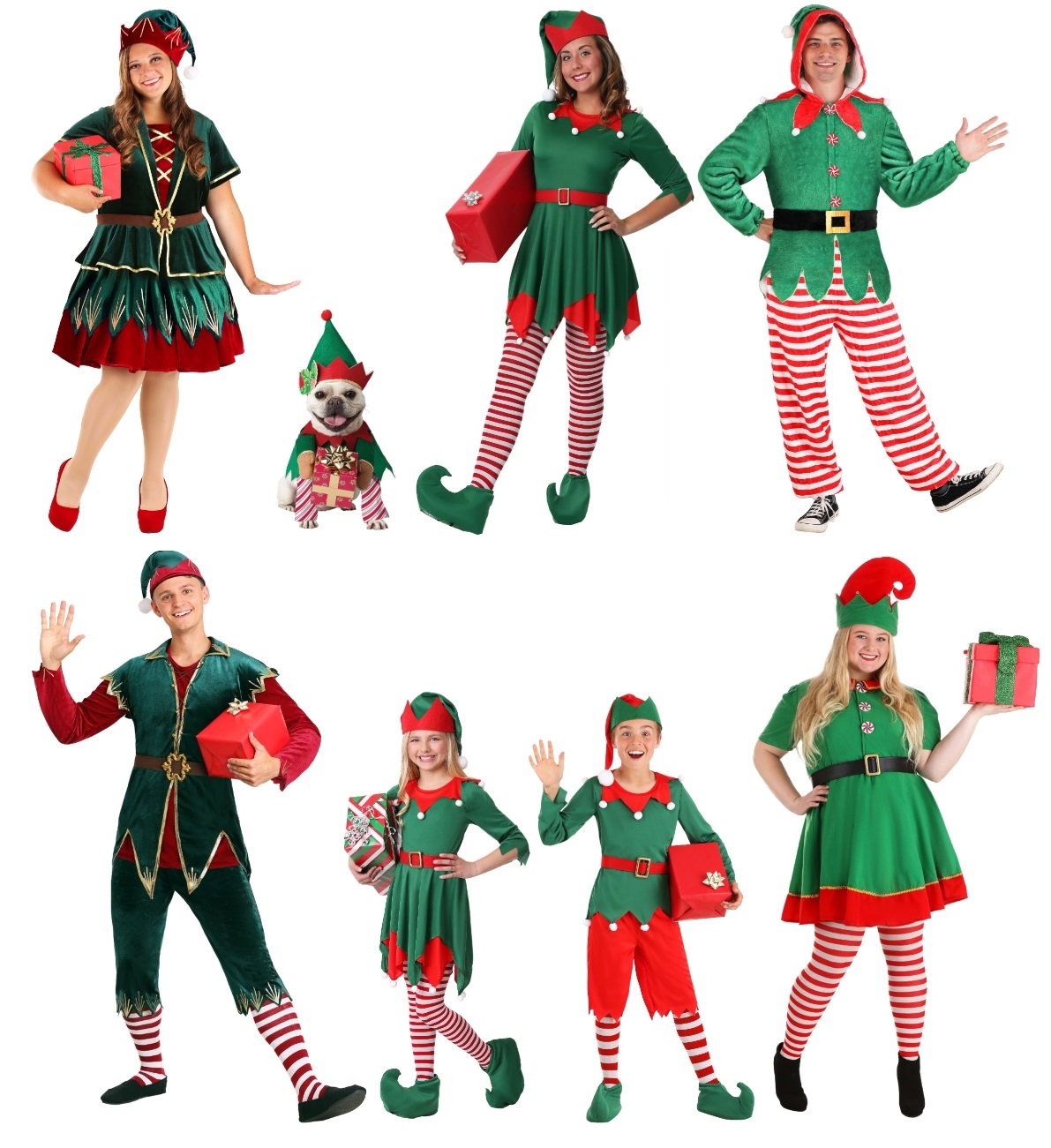 Elf costumes are certainly a family favorite! Not only are they great for family photos, but they're often the costume of choice for whoever hands out presents at the family gathering. (Plus, they take great "elfies"!) Christmas elf costumes come in many shapes and sizes for all members of the family, but the one thing they have in common is the familiar green, red and white Christmas colors. Get ready to hand out some holiday cheer wearing your favorite Christmas elf costume! 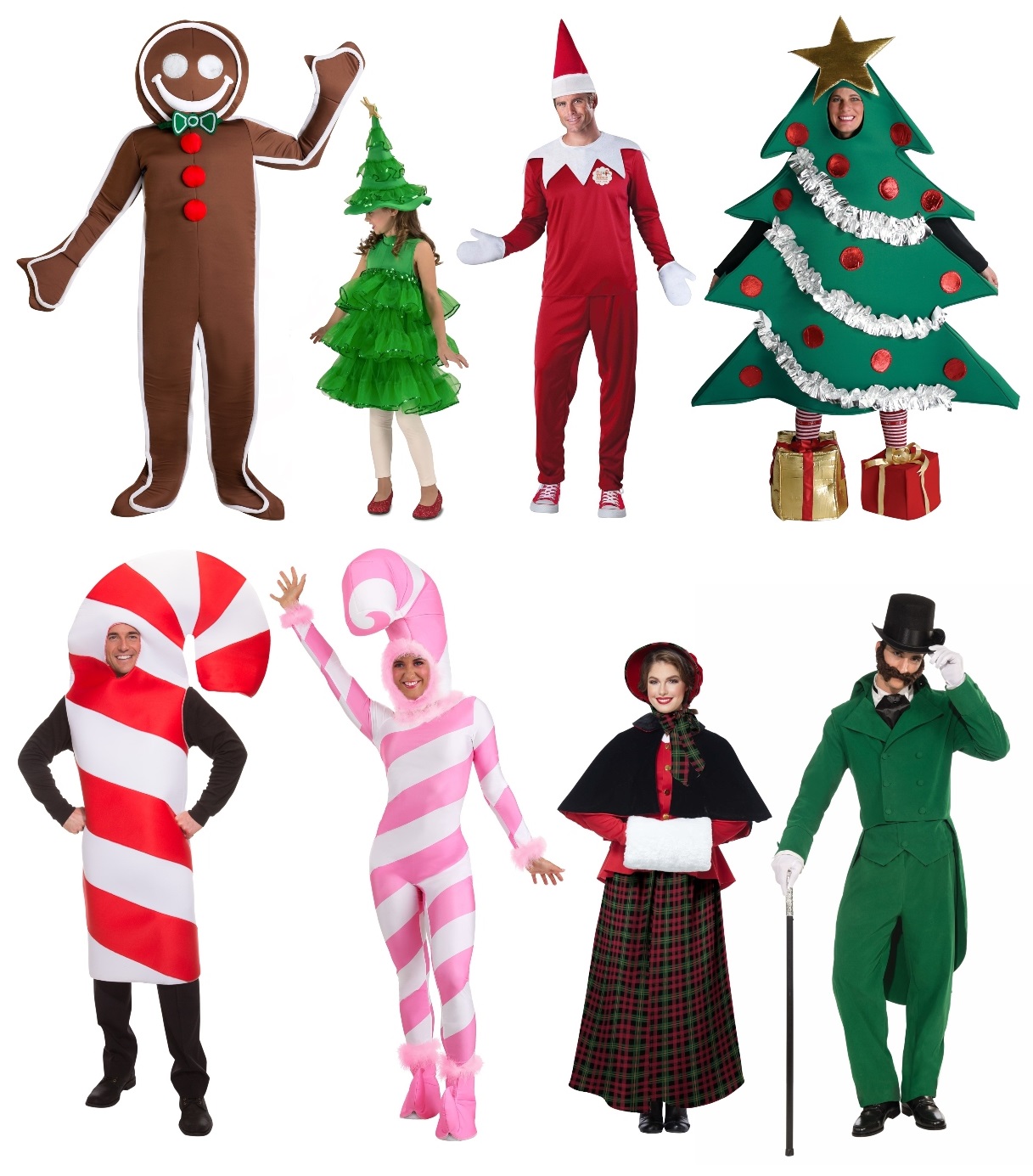 If you're not into all the Christmas media stuff and popular holiday figures, perhaps you'd prefer a more generic Xmas costume. There are holiday costumes portraying Christmas staples like holiday cookie costumes, candy cane costumes, Christmas tree costumes and caroler costumes. You can also wear an Elf on the Shelf costume if you enjoy some of the newer Christmas traditions. (Make sure to take lots of silly pictures being in odd places like your toy counterpart!)

If you happen to love sexy costumes for every occasion, fear not! We do have sexy Christmas costumes for you. Choose from a variety of cute Christmas rompers, glittery sequin outfits and crop top costumes. You just might make Santa's naughty list, but we're sure that you'll still be getting Christmas gifts this year.

Christmas Hats and Other Christmas Accessories 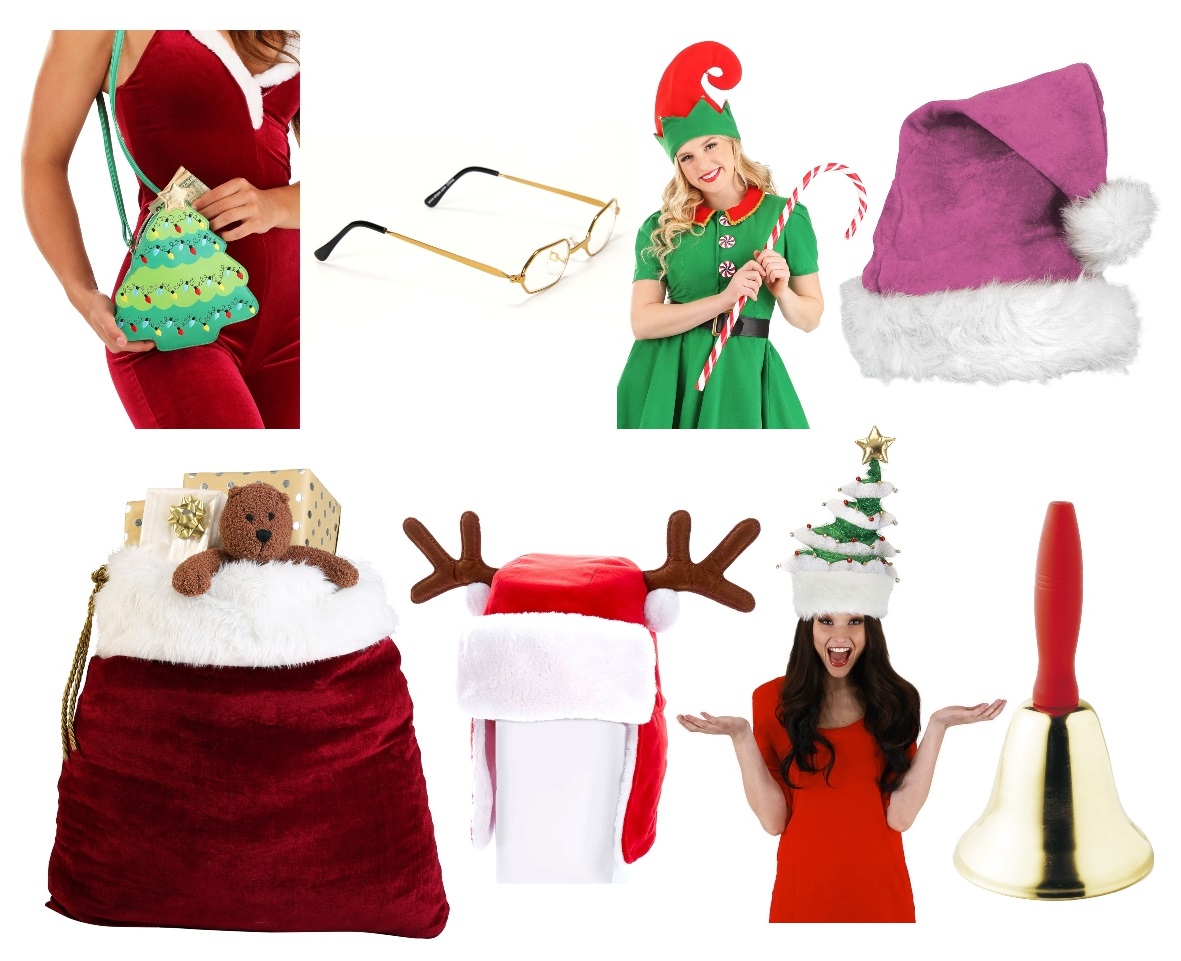 Not everyone wants a full costume for Christmas, and that's okay. If you're simply looking for some silly Christmas accessories to wear with your ugly Christmas sweater or to the jingle bell run, we've got you covered. Many of these are funny Christmas hats to wear on your head, so choose wisely! (You only have one noggin, after all.)

What's your favorite Christmas movie? Are you thinking of dressing as any characters from any of them? Let us know if there's anyone you think we missed. Our honorable mentions go to the Wet Bandits from Home Alone and Jack Skellington from A Nightmare Before Christmas (but we all know that's a Halloween movie, right?). You can check out our Christmas and movie costumes so you can have a fun and memorable Christmas dressing up as your favorite characters. Happy holidays!