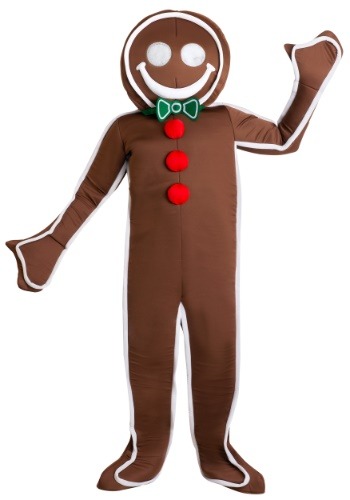 Legends tell of a creature that dwells deep in the forest of the kingdom. Many laugh at the mere idea that such a being might exist, much less threaten us all. But, those who have seen it know better. More, those who have heard its wretched and shrill cries as it sings about the inevitability of all our destruction are often left maddened, their minds shattered as they hug themselves in fetal positions for the rest of their days.

Other medieval cryptid hunters understand the threat that this walking monstrosity of a baked good can mean for the world. They've dealt with the bunyip, mothman, chupacabra, and even the kraken and its mighty tentacles that drag ships to the depths. But, none are prepared for the Gingerbread Man! With a speed unlike any other living creature, this thing escaped a witch's oven and proudly cheers of its immortality as it steals pies out of windows and snatches candy from babies! What could the creature be doing with all these confections? Will we soon see an army!?

You may be our only hope to catch the creature in action. Our in-house design team has put together this look that will fool all sorts of magicked beings... and it's incredibly fun to wear, too! We introduce the Iced Gingerbread Man costume. This is a foam backed jumpsuit with piping and detailing that looks just like a giant cookie man! Attached mitts, included boot covers, and a foam headpiece complete this (seemingly) humorous, fantasy look.

ALL FUN AND GAMES

Everyone is going to love this classic interpretation of an old folk story and you can even practice the lines like, "You can't catch me!" and get extra goodies. Just remember: the real gingerbread man is out there, somewhere... waiting. But, with this look, you'll finally catch it and end the snack-vanishing nightmare for good!

Questions & Answers
Q: Do you have one in large or medium also what is the standard? I am very interested in the gingerbread Man adult costume

Please reference the size chart to see which size would fit best for you! An additional tool is the costume sizing tips page.
Answer
Ask a Question
Reviews
4
(1 Review)
5 Stars
0%
4 Stars
100%
3 Stars
0%
2 Stars
0%
1 Stars
0%
Write A Review
Sort By Most Helpful
Filter By All Ratings