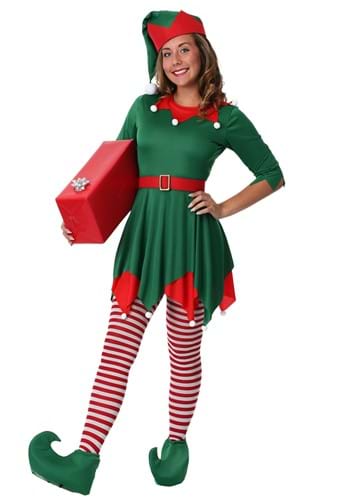 There's No I in Santa

Like all major celebs, Santa requires a good deal of help to keep him looking good. That hair and beard need constant upkeep. The reindeer need tending. And now that toys are highly technological, someone has to teach Ol' St. Nick how to program, tinker, and troubleshoot. We hate to burst your bubble, but Santa isn't magical—well, not entirely—he's just got a great team behind him that keeps things running smoothly.

But we're not telling you anything you don't already know. You've been working hard as one of Santa's many helpers for years...but now it's time for a promotion! That's right, you're about to become Santa's number two, his right-hand elf, his go-to-gal, THE Santa's Helper. And thus, you'll need a costume that tells everyone up at the North Pole that you're someone Santa trusts so much, he even tells you where he keeps his Naughty & Nice List. And everyone knows that hiding place changes weekly, is protected by a complex password, and that the list will self-destruct in the wrong hands. So, yeah, you're kind of a big deal now.

Our design studio collaborated with the team up at Santa's workshop to craft this authentic Women's Santa's Helper Costume just for you! It's the official uniform of Santa's second-in-command, and will keep you looking ship-shape, capable, and...you know...appropriately elf-like. Comprised of a  green and red fitted dress with a jagged hemline, jester collar, red belt, and white pom pom accents, this costume also has matching green booties that curl at the toe in Elvish high style. The matching green and red hat tops off the look and keeps you cozy as you run errands and make the magic happen for the big guy!

So, shake out those first day jitters, because you were born to fill these (pointed) shoes! We can't wait to see what innovations you bring to your position. Enjoy your new look and responsibilities, but don't let it go to your head! That's how we ended up on the Naughty list one year. It sucked.