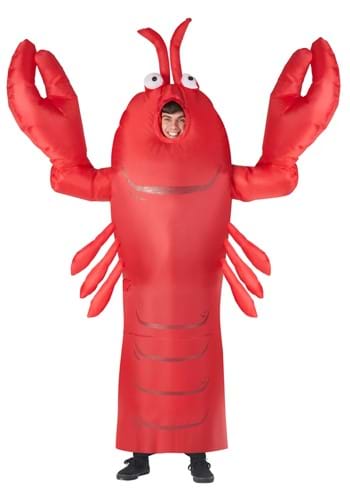 A lot of people don't know this about lobsters, but they are actually known as the party animals of the sea! That's right, marine scientists studied thousands of lobsters and found them to be more social than your average crustacean, and they were even seen gathering in large groups late at night, with glowing sea anemones used for disco-esque decor.

OK, we kind of made all that up, but why shouldn't lobsters get a reputation as super-fun ragers? They have as much right as the next creature to find their comeuppance in the world, right? If you lived with the threat of being boiled and served with butter, you'd party like every night was your last, too! Now you can do your part to start a whole new dialogue around lobster perception with this Adult Giant Lobster Inflatable Costume. Go ahead and boogie on the dance floor all night long, because this crustacean came to get down! Dang, you make being a lobster look so easy, carefree, and fabulously fun, soon everyone will want to be a "party lobster" for Halloween. What a trendsetter!

To totally transform into a lobster without this costume can take multiple pieces and a lot of red face paint, but with this clever costume, simply inflate the single jumpsuit, and voila — you're a lobster! There is an internal battery pack and fan that keeps your ragin' red self going all night long, as well as fun details like side "legs," tail details, enormous claws, and a jolly lobster head on top of the hood.