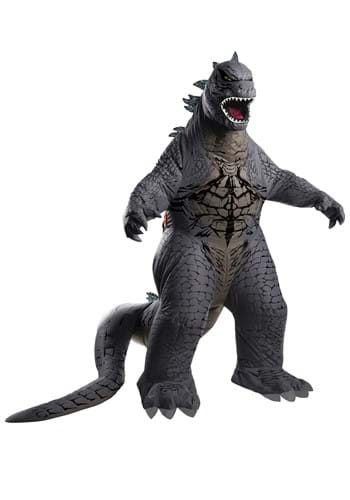 Godzilla might be best known for searing skyscrapers with his white-hot breath and causing untold damage to downtown areas, but he will always be our hero. Which of us hasn't wanted to be a prehistoric Titan lizard monster with the ability to level a skyscraper with one stomp? Come on, we can't be the only ones. Also, that atomic breath is SO cool. If you didn't want to do your homework, you could just incinerate it with one puff. Who would dare to assign you more?

Everyone fears the might of Godzilla, and everyone will cheer when they see you in this officially licensed Inflatable Godzilla VS Kong Godzilla Child Costume! The one-piece jumpsuit slips on over your street clothes and inflates with an attached fan (batteries not included). All that air gives you an epic, monster-like figure, from your scaly, three-toed legs to your muscular arms. An oversized tail snakes from the back of the costume and drags behind you as you stomp through the downtown metro system (or your sister's bedroom - watch out, Barbies!) Fearsome spines march from the back of the neck all the way down to the top of the tail. The head features Godzilla's angry narrowed eyes and open mouth, which displays a ring of white teeth. The mouth also serves as a viewing port so you can see where you're going.

King of the Monsters

We don't mean to sound biased, but we're pretty sure that there's no question which monster would win an actual fight. Kong is cool and all, but giant lizard. Atomic breath. Pretty sure we mentioned the atomic breath! We'd pick Godzilla any day.