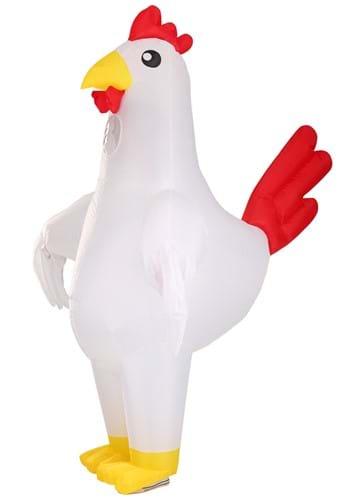 It started out as a normal night. There you were, waddling down the street on your way to a Halloween party, pecking a little at the sidewalk when you thought you saw a gummy worm (it turned out to be a regular worm - no thanks.) It wasn't long before you realized that you were being followed. You turned around fast, flapping your wings and squawking a challenge. Out of a nearby car jumped a familiar figure - the KFC mascot! "That's some finger-lickin' chicken!" the Colonel yelled, charging your way. "You'll make enough delicious entrees to last the rest of the year!"

It's no wonder the Colonel mistook you for the real deal - this Adult Chicken Inflatable Costume is a clucking great disguise! The bodysuit has adorable fowl details, from the yellow feet and beak to the red comb and tailfeathers. An attached fan keeps your costume inflated even while doing the Funky Chicken on the dance floor. A viewing port in the neck is lined with clear material so that you can see where you're going.

As you ducked into a nearby alley to escape the KFC madness, you realized that your escape route is blocked by another figure in white. A fellow chicken? No! It was someone wearing the Chick-Fil-A uniform! "Eat Mor Chikin!" she yelled, running at you while brandishing dipping sauce. You turned around, but the Colonel has blocked the way back. As you watch, they charge at each other, hollering that the big chicken is theirs to claim. While they fought it out, barbecue and gravy flying, you sneaked out as quietly as you can. This chicken has lived to cluck another day!