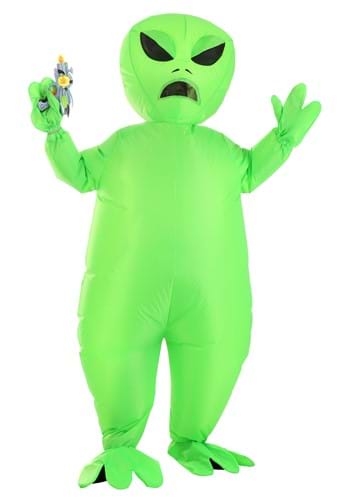 What do you think aliens could look like? There’s so much variety in the life that we have discovered on Earth that it makes us think the possibilities are endless. Alien biology would also be hugely dependent on what their planet looks like. Would aliens be super tall or super tiny? Would they have a different number of limbs, eyes, noses, or toes than we do? Maybe they’d be more insectoid than humanoid and have wings, or perhaps they would have tails as well. For some reason, pop culture collectively decided that the stereotypical alien would probably look like “little green men.” We’re not really sure why that concept has been the one to stick around, but we think it’s pretty fun!

If you’re looking for a Halloween costume that’s out of this world, you might like this Adult Inflatable Alien Costume! (Sorry, we had to put that joke in at least once.) We wanted to create our very own twist on the “green men” and make them big instead of little! Nobody will mistake you for a human while you’re wearing this awesome costume. Just put it on, turn on the fan, and you’ll look like you came from anywhere but Earth! And even though you’ll be completely enclosed by green nylon so nobody can see how human you are, we tried to make sure you won’t run into (too much) stuff. The mouth on the costume has a black mesh covering so you can see out, but others can’t see in. Whether you join a group or decide to fly solo, you’ll have a great time in this inflatable costume!

If you’re getting tired of looking like a human, mix it up for a while with this Adult Inflatable Alien Costume. We only ask that you refrain from trying to abduct anybody!