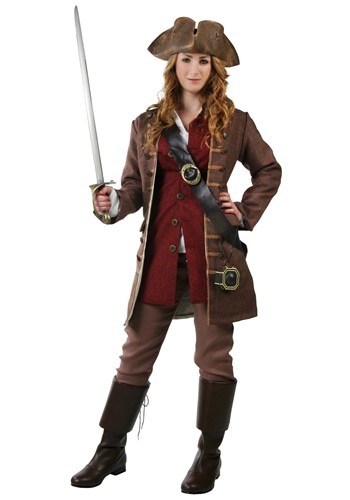 A real pirate doesn't need fancy clothes or a shiny sword to do their job. Of course, if a pirate happens to have nice clothes, there's no rule that says she can't show them off. When you're wearing our exclusive Authentic Caribbean Pirate Costume for Halloween, everyone will know you're a real swashbuckler who's not to be trifled with!

Ask any pirate what they need to do their dastardly business, and they'll all say the same things: a sharp blade, a sturdy ship, and maybe a barrel of rum to help pass the time. We doubt you'll hear some proud salty buccaneer say that nice clothes are also important, but we know how it really is. Storming the deck of a treasure ship wearing ragged, filthy clothes may seem savage and terrifying, but any well-to-do pirate wouldn't be caught dead in cheap, worn out threads (which, considering a pirate's work environment, was a very real possibility). And dressing in a snappy outfit could actually make you even more intimidating, as it shows you're a successful pirate of good taste, and doesn't mind getting into a sword fight in their nice clothes, because you're just that smooth!

We've designed this fantastic costume to look like something a truly skilled and savvy pirate would wear. It includes nearly everything you'll need to look like you've just sailed in from the Caribbean. All you'll need to pick out is a pair of cuffed pirate boots, a dashing hat, and a sword to carry on your quests, and you'll be the fiercest buccaneer at the party!