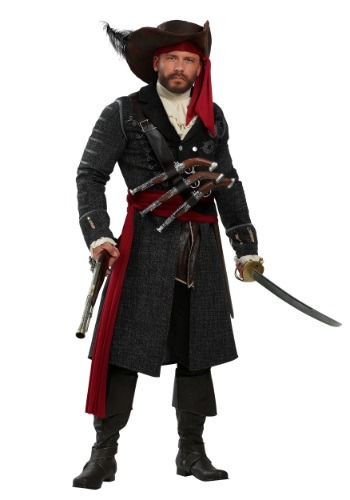 Sometimes, life just never turns out like you planned it. Our dream was to sail the seven seas in search of treasure, adventure and rum, but the years ticked by and we had to grow up. We never learned how to wield a cutlass and although we've scoured garage sales in search of a proper pirate ship to command, we still haven't found one...

The dream doesn't have to end there, though. Through the power of costumes, we've found a way to turn anyone from an every day kind of guy, into a feared pirate captain, like Edward Teach, or as you may know him, the infamous Blackbeard! It doesn't matter that you don't have a Queen Anne's Revenge of your own to command. It doesn't even matter that your “crew” will be a ragtag group of whatever friends you have around the neighborhood. All that will matter is how fearsome you'll look while wearing the full garb of an imposing pirate captain from history.

This plus size Blackbeard costume spares no detail when it comes to recreating a devilish pirate look. Make no mistake, this costume turns you into a true leader among swashbucklers. The woven jacket features screen printed details, and an attached false vest front truly emits the the aura of a true captain, not like some of those other pirate costumes that make you look like some run of the mill cabin boy. The jabot adds an elegant touch, while the sash and cross belt add a touch of authenticity. The boot covers help turn a normal pair of shoes into buccaneer boots, while the hat puts the finishing touch on the look.

Now, gather up every scoundrel in your scurvy crew to let them know that the captain has arrived! Your first order of business? Do some garage sale hunting to find yourself a worthy vessel! Yaaaarrrgh!