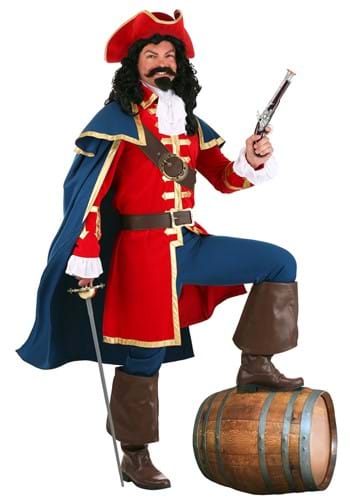 Not many people want to be white-collar criminals, but plenty of dashing souls want to be pirates. Why? Because pirates are awesome, that's why! The buccaneers of yore were larger-than life. Blackbeard tied lit fuses into his beard during battles to freak out his enemy (we're guessing it worked). Sir Henry Morgan held a whole town for ransom and when the governor tried to capture him, offered a huge reward to anyone who would capture the governor instead. #Confidence, right?

Pillage, plunder, and sack ships up and down the Spanish Main while wearing this Men's Deluxe Rum Buccaneer Costume! The exclusive costume includes a long red coat with white ruffles and a long blue cape, both trimed in golden fabric. A fluffy white jabot shows that you may be a ruffian, but you're a ruffian with standards. Two belts accent your waist and chest. The comfy blue pants are great for a day of combat, and the tricorn hat is sure to impress even your enemies.

Yo Ho Ho and All That Jazz

Swash your buckle, load the cannons, and prepare to board! Once you've added your fake weapon of choice to this amazing outfit, you'll be the most impressive person at your next party or performance thanks to your sheer level of swagger. No ship sailing between the Americas and the Old World is safe from your maurading, and no dive tavern on a coastal beach can keep up when you're around. It's a gift, really.