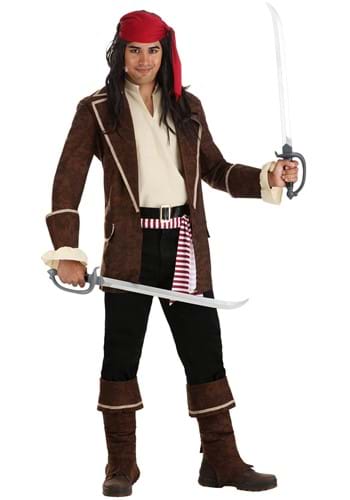 Legend of the High Seas

Back in the olden days, pirates were terrifying threats. They were murdering, pillaging, uncouth and unwashed thugs who burned and besieged their way down the High Seas. Grown men would blanch at the very names of Blackbeard and Henry Morgan. Gently-bred women would burst into tears. Nowadays, pirates have had a bit of help from Hollywood. They’re back in favor as swashbuckling, fast-talking, smooth-operating guys who have more of a Robin Hood vibe than a straight-up murdery feel. If you saw one walk down the street, you’d be more inclined to take a selfie with him than to run away screaming. In fact, you’d probably be so starstruck that you wouldn’t even notice when he pickpocketed your wallet.

Set sail for fortune and fame in this exclusively designed Plunderous Pirate Adult Costume! A V-neck shirt front of the finest material was pillaged from the hold of a merchant ship and now graces your everyday wear. It goes underneath a brown jacket trimmed with ruffled cuffs. A red and white sash ties rakishly around your waist, and a red bandanna knots around your head to protect it from the sun’s rays. A pair of brown seaboot covers finishes your dashing ensemble!

It’s the Pirate’s Life for You!

This Halloween, it’s up to you how you want to live your pirate destiny. Will you terrorize the neighbors with gruesome sea shanties, steal all of the candy from the party bowl, and declare no quarter on the dog next door who won’t stop barking? Or will you be the suave, lady-killer type whose swordfighting skills are only equaled by his hilarious wit (and who still has all of his teeth)?