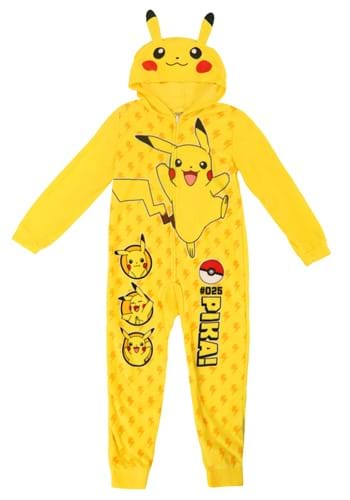 One thing is absolutely true - Pikachu is the cutest Pokémon in the world. There's something so irresistably adorable about its wide-eyed state, its quirky tail, its happy smile, and the red spots on its squirrel-like cheeks. But don't be fooled! Anyone who thinks that its harmless will soon realize their mistake when it defends itself with a mighty bolt of lightning. It really makes you wonder: How can something so "SQUEE!"-inducing be so incredibly dangerous?  We bet you've asked yourself the same question about your own kid! He may be adorable, but he's also capable of mass destruction to furniture, clothes, and more (especially when fueled by sugar!)

Your child will love transforming into her favorite Pokémon when she wears this officially licensed Pika Friends Blanket Sleeper For Kids! The one-piece jumpsuit is made of super-soft yellow fleece to mimic Pikachu's fur and zips up the front for easy dressing. It features all-over graphics including a full-body image of Pikachu, three Pikachu headshots on the right leg, and a Pokémon ball, the number #025, and the word "PIKA!" on the left leg. The attached hood is printed with graphics of Pikachu's face, including his red cheeks, and is sewn with two black-tipped ears.

Although this sleeper is perfect for catching zzz's, it also makes a fantastic, easy costume, as well as a comfortable choice for lounging around while playing Pokémon. If your kid loves the Nintendo video games and animated shows, he will love wearing his own Pikachu outfit!