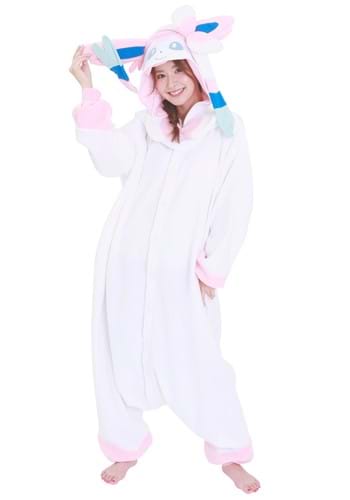 Cutest Eeveelution? That prize goes to Sylveon... and that's no small feat! Every evolution of Eevee is more adorable than the last. Flareon looks like a warm and fluffy puppy that you could cuddle with all day. Espeon looks sort of like a graceful kitty cat that would sit on your lap. Even Jolteon, who looks a little spiky, has a cute factor that's WAY above many other Pokémon. So, being the top of the pack in that crowd is a real trophy!

Of course, if you're thinking about transforming yourself into one of Eevee's evolutions, then you'll definitely want to become Sylveon. And with this kigurumi, which is officially licensed from the iconic Nintendo video game series, it's easier than ever to become your favorite version of Eeevee.

This Adult Pokémon Sylveon Kigurumi is a Japanese-style pajama costume that doubles and both relaxing loungewear and a quick cosplay costume. The unisex jumpsuit is made entirely out of an extra-soft fleece material, which is warm and cozy. The front of the jumpsuit fits with a series of buttons down the middle. The back features an attached tail. The hood is designed to look like Sylveon's face and comes complete with a pair of floppy ears on top. The front of the hood has embroidered details to really make you look like the fairy-type Pokémon when you flip it up. You can wear your regular clothes underneath the suit, making it easy to change into.

Eevee fans, it's time to rejoice! The most adorable evolution is just a simple, cozy outfit away. If you're looking to transform yourself... or if you just want something warm to wear while you fire up a new game of Pokémon, then this officially licensed set of costume pajamas is THE choice to make.