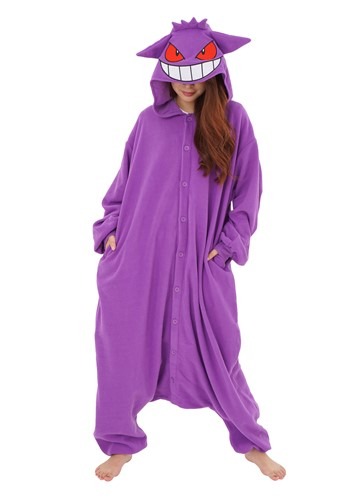 Forget about Pikachu! He's old news to us. Give us Gengar. He might not have the cool electricity powers of the rodent Pokémon, but if you ask us, Gengar really has that extra WOW! factor. He's got that winning smile, he's got an ethereal, ghostly quality about him, and he's pretty good at scaring other Pokémon in battle. We'd much rather pal around with him over Pikachu. Unfortunately, most people don't seem to know the greatness of Gengar. Pokémon like Pikachu, Bulbasaur, and Charmander seem to get all of the attention these. Pikachu's even got his own movie where he solves mysteries! Can you believe it?

Well, no worries. We want to change that and you can help us out with that! We just need to show the world how cuddly Gengar can be with this officially licensed Pokémon Kigurumi. That's right! This kigurumi is extra comfy and it happens to transform you into the signature ghost Pokémon from the original lineup of monsters.

This Gengar Kigurumi is a comfy way for you to dress up as your favorite Pokémon. It's a Japanese-style pajama costume that's made out of ultra-cozy fleece material. The jumpsuit has buttons down the center and the hood is shaped like Gengar's head. It has a pair of cartoonish eyes and his little spikes on top. Just wriggle yourself into this set of pajamas and you'll be ready to give Gengar a cuddly new image!

Whether you're trying to find yourself a brand new pajama outfit to snuggle up in when you play Pokémon, or you want to help get Gengar's name out there, this pajama costume is the best way to do it! It's officially licensed and has a cozy construction that you need to feel to believe.