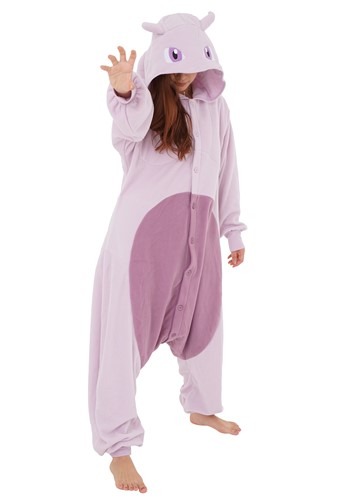 Legends have spoken of a mysterious Pokémon that dwells in a hidden cave. It's really only accessible by those with the gumption to master the league and those who even have a few Legendary Pokémon on their belt. But, if you're brave and have the faith and friendship of your PokéPals, you can meet and even capture the mighty Mewtwo.

That might seem like pretty awesome news. Who wouldn't want to have a super powered psychic Pokémon on their side? Well, turns out that this epic and engineered version of the mythical Mew is only the first step. No, we're not talking about any Mega-Evolutions and we're not suggesting that it's going to be something weird like Pikachu running around with a brand new mask. We're talking about the rumors of a Mewtwo-Human hybrid! Just imagine all of that creative energy of a Halloween-loving human blended in with the endless psychic strength of this toughie!

Don't let the thoughts of the Mewtwo hybrid keep you up at night. In fact, when you gear up in this Pokémon Mewtwo Adult Kigurumi, not only will you have thee ally in the coolest Pokémon out there, but you'll be snuggling up for a cozy nap dressed just like them! This Kigurumi is made of soft fabric and bound together with elastic cuffs, an invisible zipper, and transforms you fully thanks to the oversized hood bearing Mewtwo's face.

Nobody ever knew that one of the most powerful Pokémon out there could get even stronger. Or cuter. But when you combine your human talents with the psychic majesty of Mewtwo, there's going to need to invent a whole new class of Pokémon to describe the glory! While we're figuring what comes after Mythic, you just relax in the comfy fun of this Mewtwo Adult Kigurumi!