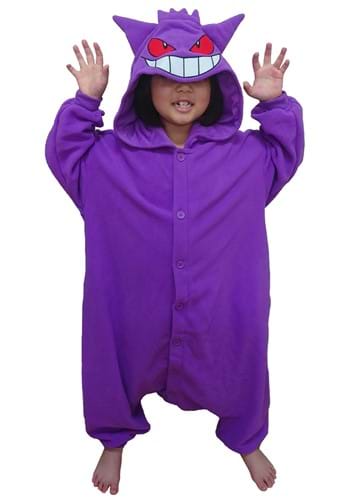 Bump in the Night

Not all Pokémon are Snorlax and Jigglypuff-levels of cuddly, you know. In our journeys through Kanto and Johto, we learned a thing or two, so trust us: Some are heavy trees that block convenient paths between cities, or rock behemoths that tower over us mere trainers, or even cold steel magnets that just, well, wouldn't be all that cozy! Then there's Gengar, the Ghost-type Pokémon who we know would give a great hug if given the chance. Unfortunately, Gengar is too often preoccupied pranking folks dark alleys.

We know! Here, put this Pokémon Gengar Child Kigurumi on your little one. That's probably the closest we'll get to the real thing, so we'll just savor it. The Kigurumi is made of a soft polyester fleece and features front buttons, side seam pockets, and wrist and ankle cuffs. Last but not least, the appliqued and embroidered Gengar face on top of the hood really gives your little one a scariness we never knew they were capable of! The purple color is reminiscent of the lighter shade of Ash Ketchum's own Gengar in the anime series, in contrast with the dark, menacing Gengar seen elsewhere throughout the show.

Scared of Your Shadow

We know you raised your little one right, so we shouldn't have to worry about what type of Gengar they'll be. Oh, the types? The dark, sinister one we all know and fear, or the one who gives nice, big hugs like we assumed Gengar always could!  Ah, so many possibilities. We have all the faith in the world they'll choose the nicer path, but admittedly we're glad we don't have to stick around to find out. C'mon, you can't blame us -- have you ever seen your shadow move independently alongside at you? Didn't think so.