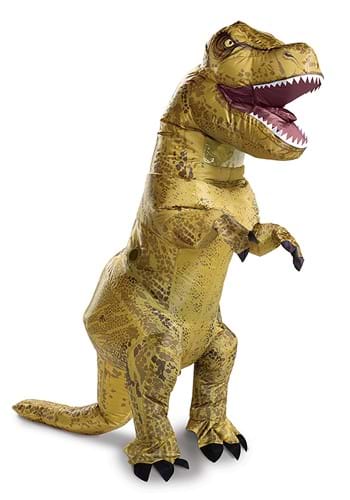 King of the Dino

All of Jurassic World is abuzz with the news. A new kind of dinosaur has just been created, not discovered, and the scientific world is triumphing. This Indominus Rex is rumored to be unlike any other, capable of camouflage and brutally cunning. Of course, stuff happens as it always does when you bring a giant flesh-eating lizard to life and then expect it not to eat people. When the Indominus escapes, the whole island is in peril. Even the other dinosaurs are afraid - all except one. Alone in its cage, the Tyrannosaurus Rex waits, smiling its perpetual, toothy smile. It may not have a flashy new name or all the bells and whistles of a genetically engineered brute, but sometimes you just can't improve on nature. The upstart will shortly know who's the real boss on this island.

Roar like the winner you are when you wear this Jurassic World Inflatable T-Rex Costume for Adults! The polyester suit is perfect for stomping around and terrorizing the populace. Thrillingly realistic, from its claws and tail to its powerful snout, it comes with a built-in fan to keep it fully inflated. A clear peephole in the neck lets you see where you're going while you're stomping through the Jurassic World gift shop after escaping tourists and punting kiosks out of your way.

There's no place where a giant lizard isn't welcome. From an epic showdown on top of an island viewing deck to a supermarket visit, everyone will love the sight of the most famous dino of all. Just please try not to eat people. That's generally frowned upon on the mainland.