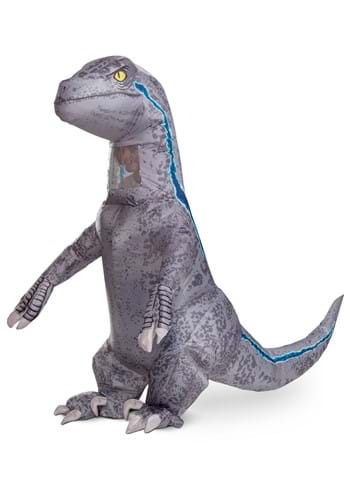 Boy, Beta sure does look grumpy, doesn't she? Then again, you might be grumpy too if Biosyn wanted to capture you for your DNA. It seems like everyone and their brother wants to get their hands on Beta, and the normally perky dino really just wants to chill in the woods and go hunting with her mom!

Well, this Kid's Jurassic World Beta Inflatable Costume does a fantastic job of recreating Beta's grumpy look in this officially licensed costume. It transforms the new dinosaur from the series into a fun inflatable costume that will have your child ready to escape would-be kidnappers to hang out with their dinosaur pals!

This Jurassic World costume comes with a full-body jumpsuit that is made out of airtight material. The suit has printed details, including an all-over print of dinosaur scales, a pair of blue stripes on the back, and an adorably grumpy face on the head. The costume comes with an attached fan in the back. Just insert batteries, flip the switch, and the costume inflates within just a few minutes. Keep the fan running and the costume should keep its shape as your child walks the earth as the world's best raptor! When fully inflated, the costume has pronounced features, including Beta's clawed feet, a plump tail, and a pair of dino hands in the front. Another great part about this costume is that your child can wear normal clothes underneath, so your child can transform into a dinosaur in an instant!

Beta loves nothing more than hanging out with her mom, Blue! Why not recreate some of the scenes from Jurassic World by sharing the dinosaur experience! We carry some great costumes that will help you match this child Jurassic World costume, so you can do some group hunting!