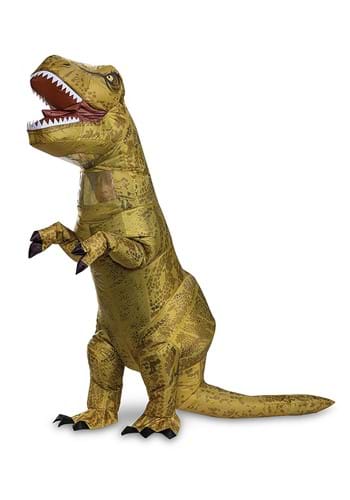 It Can't Be Contained

Humans can think what they like. The dinosaurs are the real masters of this island and the T-Rex rules them all! It may be behind an electrified fence for now, but the day will come when it seizes its chance and is free to roam the theme park and eat all of the ice cream from the snack stands. Maybe it will even eat a few visitors too, while it's at it. Trampling through information booths and bus stands really makes you work up an appetite.

Transform into the King of the Dinosaurs in this officially licensed Child Jurassic World T-Rex Inflatable Costume! The jumpsuit has an inflatable tail, enclosed T-Rex arms, and an attached hood shaped like the famous dino's head with its mouth open in a roar. Its polyester windbreaker fabric is printed all over with a dino scale pattern. The costume includes a battery-operated fan mounted behind the right hip that keeps the costume inflated. It zips up the back for easy dressing.

Everyone is buzzing about the Indominous Rex: You know, that new, modified dino that's part raptor, part T-Rex, and part a lot of other things? Big deal. The T-Rex isn't scared! It knows that it's the real threat on the island, the mainland, and everywhere else. This T-Rex will conquer the world, stomp around any neighborhood it wants, and probably get the most candy for Halloween too! Who would refuse chocolate to a hungry dino?