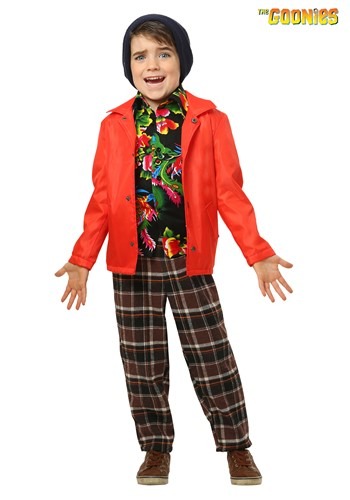 An excellent costume for your little one that allows YOU to relive your childhood!

If you were a kid growing up in the 1980's, there's a pretty large chance that you remember Chunk from the Goonies. If you don't, we can gladly refresh your memory. He was the chubby kid in the bunch who often kept a handful of Baby Ruth bars in his pocket, and he also did the dance known as the "Truffle Shuffle." You know, the infamous dance which required him to shake his belly around while making weird noises. Yeah, no one can forget the brilliance of the Truffle Shuffle! Now, you can introduce a new generation to the classic Steven Spielberg movie by showing your toddler the movie, The Goonies. We have a feeling that your toddler will like Chunk's character the best of all the Goon Docks boys because, well, Chunk's the coolest!

This officially licensed Goonies costume will make your little one look exactly like the beloved character. Mixing prints was Chunk's signature fashion choice, wearing a plethora of crazy prints throughout the movie. Chunk was decked out in a orange hooded jacket, plaid pants, and a Hawaiian button up shirt, and that's exactly what you'll receive with this exclusive costume. The plaid slacks are comfortable and the orange jacket will keep your little guy warm while he collects Baby Ruth Bars. We think that you should dress up as Sloth as a cute parent/child costume idea. Also, teach your toddler how to do the Truffle Shuffle so whenever you're in need of a smile, your son can put on his Chunk costume, wiggle his belly, and make you laugh. What a great memory!