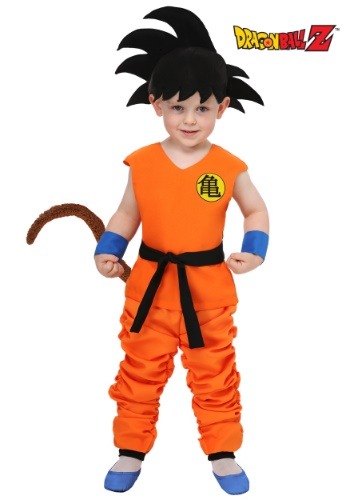 It's hard to believe. Isn't it? Goku has trained in 100 times the Earth's gravity. He has defeated Frieza, a being so powerful he could blow up a planet with just his finger. He fought against a living God of Destruction and lived to tell about it. He's saved the world from complete destruction on countless occasions. He even did the impossible! He raised a little youngster of his own into adulthood! But that's not even the unbelievable part! The most unbelievable part is that he started his lifelong adventure when he was just a little squirt!

Yes, Goku began his planet-saving adventures when Bulma showed up at his doorstep looking for a Dragon Ball. Back then, he couldn't even lift an automobile with his bare hands. Now, he can shoot a ki beam from his hands that would destroy an entire city (not that he ever would, mind you). Anyways, our point is that every great journey needs to begin somewhere and your child's journey is about to being when he wears this Dragon Ball Z Goku Costume for toddlers.

Now you can train your little one to be a young Saiyan fighter! This Dragon Ball Z toddler costume is licensed from the Akira Toriyama anime series and comes with everything you need. It has a bright orange top that has Master Roshi's symbol printed on the front. It comes with a pair of matching orange pants that have an elastic waist for fitting. The pants also have a plush monkey tail attached to the back. A black belt and pair of blue wristbands are also included. To finish off the look, this costume comes with a foam headpiece that recreates Goku's signature hairstyle from the anime series.

Once your child is all dressed up as the one and only Goku, it'll be up to you to train him to be a strong Z Fighter! Of course, this could be the beginning of your own journey as a martial arts master. You could even dress up like Master Roshi!