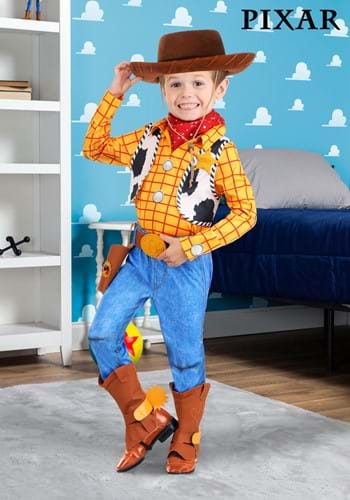 It’s hard to ignore how elaborate some games kids play become. It brings a smile to your face watching your toddler’s imagination blossom and build block towers and cardboard box villages. Seeing them move toy cars, plastic dinos, and cloth dolls through the playtime town is magical. And it’s clear, if they could, your kiddo would shrink to play alongside their toys instead of operating their stories from above.

Then their eyes lit up brighter than ever while watching Disney and Pixar’s Toy Story. They were captivated by Buzz falling in style. Giggles turned to belly laughs every time Rex got startled or any of the pals pulled off their amusing antics. But it was Woody that held their full attention. And playtime followed suit. Villages became old west towns. Toy trains, steam engines in need of rescue. And each adventure pulled them further into their make-believe land.

Grant playtime wishes when you bring home our Deluxe Disney and Pixar Woody Toddler costume from Toy Story! The officially licensed ensemble recreates Woody’s iconic look with thoughtful pieces from the Made By Us team. Your toddler is ready to dive into Toyland outfitted in sturdy, yet comfortable jersey pants, shirt, vest, and bandana. Each piece features sublimated prints giving the costume a high-detailed finish. Once layered, the look comes down to included accessories. Comfortable footwear or stockinged feet become boots under embroidered, leatherette shoe-covers. The elastic waist-banded pants are given a polished look with a matching leatherette belt. And the entire ensemble is capped off with our exclusive Woody hat.