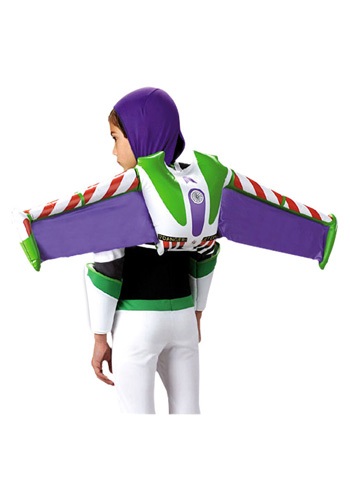 Listen up, cadet! There’s only one way to get to infinity… and beyond: it’s an inflatable Buzz Lightyear Jetpack like this. If you’re looking to join an elite outfit like Star Command, you’re going to need top-of-the-line gear—and it doesn’t get any better than Buzz’s own backpack-mounted personal glider!

Lightweight and convenient, this officially licensed accessory comes in squeaky-clean Space Ranger white, Emperor Zurg purple, and a green that’s just a tad darker than the skin of those toy aliens from Pizza Planet. Oooooh!

Whether you’ve got a friend dressing up as Woody or Jessie or you’re simply flying solo, this rocket-powered prop is just what you need to capture the authentic look of Toy Story’s relentlessly charismatic keeper of the galactic peace!

In fact, it looks so real that you might have a hard time believing that you’re just an action figure—which, come to think of it, you’re not! Now get out there and foil some evil plots!