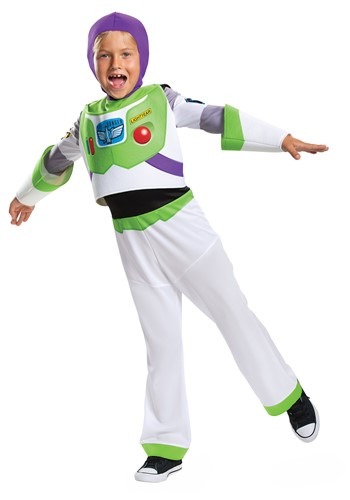 Woody talks a lot about exploring the wild west, the great frontier that is filled with adventure and danger. Well, maybe Woody doesn't talk about that so much as his voicebox does when someone pulls his strings. Come to think of it, Woody isn't really that much of a cowboy when he's just speaking on his own. Buzz, on the other hand, is a true to life Space Ranger. Well, again, he's actually just a toy version of a Space Ranger, but at least the guy knows what's up!

With a catchphrase that wins folks over every time—way better than snakes in boots!—Buzz is certainly the more authentic toy of the two best buddies. We can't blame Andy and the rest for seeing Buzz as the newest and most epic of toys. The Wild West might have been a pretty amazing frontier, once, but "infinity and beyond?" We all know which one we'd rather choose! So, it's no surprise that your tyke is ready to take off and join the Space Rangers, too. We can help!

With this officially licensed Buzz Lightyear Classic costume, your toddler is about to become the favorite character in all of Toy Story fame! This costume is a comfortable jumpsuit that features all of the iconic design of Buzz Lightyear's space armor. The bottom half is white with green accents and the top is a blend of white, purple, and green. The fabric hood pulls over your kiddo's head and is made of comfy fabric. All they'll need now is to perfect that signature line!

The best part of being a Space Ranger is that you're never alone. And Buzz has even more friends than most. Your kiddo can team up with Woody, Jessie, and the rest with our line of Toy Story costumes and truly feel like they've reached the infinite frontier.