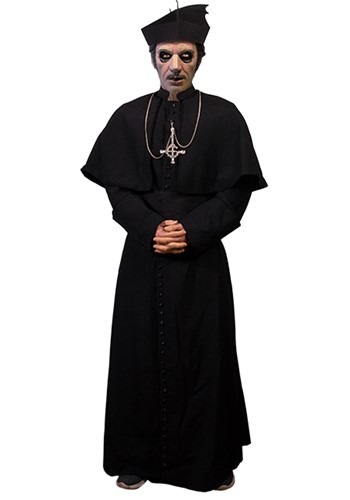 Papa Nihil has spoken. The Emeritus bloodline no longer pleases him. Papa Emeritus I, II, and III all served their purposes during the Emeritus reign, but their time on the stage is over. It's time for an era of leadership for Ghost. It's time for something... unexpected and sinister. It's time for Cardinal Copia to lead the metalheads into a new age of shredding and eerie lyrics. It will be a truly dark era... but perhaps it can be ushered in by your very hands!

If you think you have what it takes to lead the Nameless Ghouls, then it's time for you to assume the rule of Ghost's nefarious frontman, Cardinal Copia. This officially licensed costume will help you do just that.

Inspired by Tobias Forge's fourth incarnation of Ghost's lead singer, this costume transforms you into one deadly looking leader. The costume was designed by B Ackerlund, who worked on the official costume worn by Tobias during Ghost performances. It comes with a black robe that mimics the look of the Catholic priest habits. It also comes with a matching hat. When you put it on, you might just feel the intense desire to step on stage to preach a ghoulish message to your legion of obedient fans. Just watch out for Papa Nihil... judging by what he's already done to the Emeritus line, his own flesh and blood, we tend to think that Cardinal Copia's time on this Earth may be limited!

If you want to become a metal legend, then perhaps it's time to transform into Cardinal Copia! With this officially licensed costume, you'll look just like the ghastly leader of Ghost. You might just have what it takes to command the Nameless Ghouls into a new era of metal.