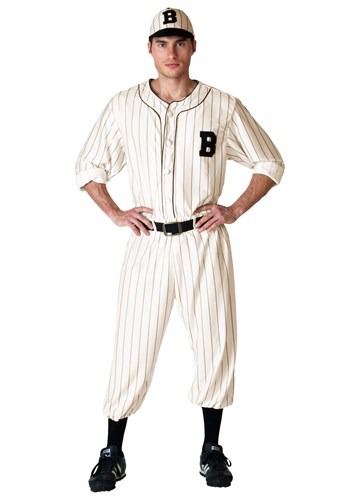 Remember the old days when you could spend a summer day at a baseball game, and the peanuts and Cracker Jacks only cost a nickel? Unfortunately, we can't send you back in time. But, we've designed this exclusive Vintage Baseball Costume for you to wear instead, and you'll feel like you're in the middle of the action!

Before you start practicing your line drives and 1930's slang to be like the legendary baseball players of old, we should probably remind you that those baseball big shots like Babe Ruth and Joe DiMaggio were really, really good! And yeah, modern players are really good too, but some train for years to get that way, while old timey players were just a tough bunch of fellas. And, when we say "tough," we mean they were probably more likely drink, smoke, and party than they were to practice, but when they stepped up to the plate, they could still knock a ball out of the park. Now, that's tough!

Of course, we don't expect you to be that tough while you're wearing this classic baseball costume, but you can still have a blast acting like a home run legend at your party! The pinstriped jersey, bloused slacks, and matching cap make you look like you've just stepped out of an old baseball card. Be sure to add a pair of long socks and vintage style shoes, and grab your glove or a Louisville Slugger to complete this look! Just don't expect the snacks to only cost a nickel when you're sporting it, though; this costume is cool, but it's not magic.